Take A Ride With Taxi Chaos

It’s hard to believe that it’s been well over a decade since we’ve gotten a new entry in the Crazy Taxi series. The open-world racing saga has been a phenomenon for many, including a huge selling point on the Dreamcast with not one but two games. The last time we saw it was with Crazy Taxi Tycoon, a mobile game that serves more as a management title instead of a “drive through everything to get your passenger to their destination” game. Sigh.
But fret not. On February 23rd, the developers at Team6 Studios will bring back that Crazy Taxi vibe – sorta. The game is called Taxi Chaos, and though it doesn’t have any of the iconic drivers from the series (or, for that matter, the soundtrack with The Offspring songs), it does have one great thing going for it – the wild gameplay.
As with the Taxi titles, your job is to get your passenger to their destination in the quickest time possible in an open-world hub. You’ll choose from seven iconic vehicles and two different drivers, and hit the road in the limited amount of time allotted. Obstacles like street lights and mailboxes be damned – you’ve got a deadline to meet. 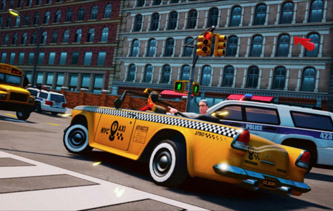 The game will feature three different modes – Arcade Mode, Free Roam (letting you explore the city for potential routes) and Pro Mode, which will challenge your craziest driving skills.
Plus, did we mention you have a jumping mechanic? Going over buildings should be a cinch this time around.
Now, before you freak out and scream, “Man, Sega’s gonna sue someone,” don’t fret. Team6 actually went to Sega to show off the game, and not only did it provide the approval to use the similar engine, but it also offered to publish the game in overseas markets, including Japan.
That’s a pretty big step, and an acknowledgement that Sega wants the Crazy Taxi vibe to return – even if it’s not quite through its developers. (Meanwhile, Orange One will publish the game in the other markets, including the United States.) The game will also see a physical release on Nintendo Switch and PS4, for those of you that want to, ahem, pick it up that way.
Sure, it may not set the world on fire like Crazy Taxi originally did back in the 90s. But Taxi Chaos looks to continue that vibe in a fun, comical fashion, and should challenge those that have been trying to make a proper buck on the road. We’ll find out how it handles when it arrives later this month.

Want to enjoy Taxi Chaos on a PlayStation 5? We’re giving one away!