It’s hard to believe that it’s been over 20 years since we first loaded our camera for Pokémon Snap on Nintendo 64. It seemed like only yesterday that we were going on a photographic tour of the rare creatures, while printing out some of our favorite shots at the nearby Blockbuster.
But soon, it’ll be time to wind some film into your Nintendo Switch for the long-awaited follow- up!
Nintendo confirmed today that the long-awaited follow-up, New Pokémon Snap, will make its debut on the platform starting on April 30. With it, fans will have an opportunity to snap some ideal shots, while also exploring some new avenues that the original game could only dream of.

Get To Shooting
New Pokémon Snap will feature a number of “diverse ecosystems” for players to explore, “from dense jungles to vast deserts,” each filled with their own special types of Pokémon.
The game puts players in the shoes of a Pokémon photographer, who will work with local Lental region expert Professor Mirror and his assistant Rita. Together, you’ll
survey a number of different Pokémon types in nature. There are several wild Pokémon types out there, so the sky’s the limit. 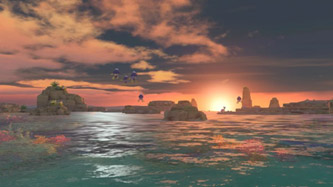 But there’s some exploration to be done here, as the islands you’ll visit looking for these creatures offer opportunities to seek out hideaways and other areas. It’s up to you to time the throw of your Fluffruit to get their attention, and then capture them at their very best. In fact, the fruit can actually help you get some unique reactions from the Pokémon, resulting in even better pictures than you might imagine.

Careful, You’re Being Ranked
This may seem like a pleasure tour to some, but New Pokémon Snap offers a competitive edge. As players take pictures of these exotic creatures, Professor Mirror will lend a hand with evaluation, based on what reactions are captured and how well the Pokémon are represented. No tour is the same, as the reactions can change quite a bit.
When special shots are captured, you’ll actually be able to save them on your Pokedex to share with others, creating a memorable album for the ages. There’s also a bit of a mystery surrounding the Illumina Phenomenon, in which you’ll need to be quick to capture the Pokémon at their glowingest (if that’s a word, mind you). 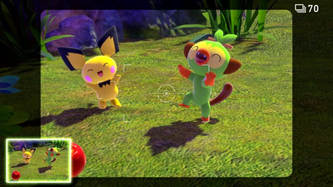 Thus far, the game looks miles ahead of the original, based on the footage we’ve seen in the trailer below. The frame rate looks a lot faster than the N64 version of the game; and the details are exquisite, as you can go all-out to capture each Pokémon at their very best. As for audio, expect some soothing melodies to tide you over while you bring out your best in photography skills.

Snap A Picture This April
There’s a lot of opportunity with New Pokémon Snap, with a variety of species to shoot and different memories to create. The gameplay looks to be on par with the original Pokémon Snap, while at the same time offering contemporary touches that should please Nintendo Switch owners. We’ll see how well the album comes together when the game debuts in late April.

Want to win a PlayStation 5? Here’s your chance!