A blast from the past.

Some of you may have never heard of the Turrican games. But those of you that owned a SNES or Sega Genesis will likely be familiar with this franchise, particularly with the work by developer Factor 5, who would later go on to work on the Rogue Squadron games. For years, the Turrican franchise was one of the most dependable run-and-gun series out there.
But then it faded off, with hardly a new entry in sight. (Though, to be fair, the indie hit Gunlord X does kind of bring that feeling rushing back for a bit.) But now, ININ Games and Factor 5, back from the dead, have resurfaced with Turrican Flashback, which celebrates most, yet not all, of the series’ legacy. That said, there’s more than enough here to have a blast with.

What’s Included
The package, which goes for about $30, includes four titles. There are two early releases – Turrican and Turrican II: The Final Fight, which were a hit on the PC front before making their presence felt on other platforms; and then there’s Factor 5’s duo of Super Turrican (from the SNES library) and Mega Turrican (from the Sega Genesis). 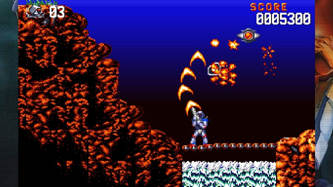 The first two games are a nice little return to the classic roots of run-and-gun shooters, with a fair amount of challenge and quirky design. However, there’s something about the latter two games that I really love. They’re emulated with care and love, and look and sound better than ever. The music by Chris Huelsbeck is well worth listening to here (actually, across all the games), and the visuals look snappy both on-the-go and on the television through the Switch, no matter which way you play.
The only real setback here is the ignoring of other games in the series. There’s no sign of the Director’s Cut of Super Turrican, which adds a dose of shooting goodness; and the awesome sequel Super Turrican 2 is also missing. Hopefully we’ll see another Turrican collection that celebrates these games the right way. For now, though, this will do.

Neat Little Options
Each of the four games included in Turrican Flashback come with handy options. For instance, you can change around things with the display, including adding scanlines (for a CRT sort of effect) and even changing the ratio, in case you feel like stretching everything across the TV screen. It actually doesn’t look too bad at all, and it’s pretty cool. 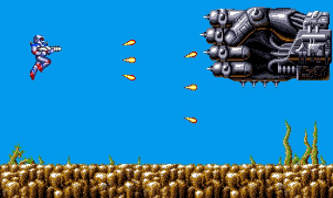 The controls have also been tweaked a little bit, so that the games feel a little easier to handle than the original. That’s not to say they don’t have challenge, as they certainly do. But Factor 5 worked its magic here to make the controls work in the players’ favor. And you can switch things around if you have a preference for shooting, jumping, and using your cool grapple arm.
Finally, there’s a “rewind” feature. While some people may consider this cheating, we are talking about the Turrican games here, which aren’t quite a cakewalk. Being able to make up for a crucial mistake and learning what to do next is part of the process here, and the “rewind” works beautifully.
If anything, I would’ve liked a little more history on the Turrican project, like videos with Huelsbeck and Factor 5 to talk about their creation and evolution – and maybe why Super Turrican 2 didn’t get the widest of distribution upon release. But this isn’t a dealbreaker by any means – you’ll still have lots to destroy here. Go get that rebound gun. 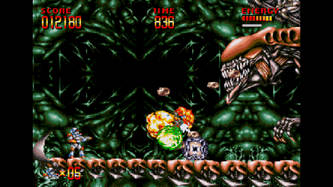 Yes I Can, Turrican
Even if it’s a little shorthanded with its history and game offerings, Turrican Flashback is a labor of love that all fans of the series – and run-and-gun specialists – will enjoy. Two of the best games in the saga are included and better than ever, while the other two earlier titles are also well worth the revisit. Throw in a variety of features, including a helpful “rewind,” and you’ve got a game that more than makes up for its missing content. Dig in and save the world, because you can. With Turrican.

Want to win a PlayStation 5 to play Turrican Flashback on? Here’s your chance! 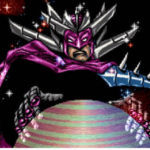