Pricey, but worth the investment.

The Xbox Series X doesn’t really have too much variety available when it comes to controller designs. Sure, all the classic Xbox One controllers work great with it and there are a ton of those. But when it comes to dedicated next-gen controllers, well, you’ve got a handful of general colors like black and blue.
Or so you think. A company called MegaModz recently introduced the ability to make your own customized Xbox Series X controller. And while the price is a bit higher than you might expect for a peripheral (around $140 or so, depending on what you add to it), the quality is second to none. In fact, with a few more designs and the debut of their previously announced mods, they could have a peripheral for the ages. As it stands now, though, it’s still worth the investment.

Getting Started
The first thing we did was head over to the official MegaModz web page and pick out what design we wanted for the Xbox Series X. There are different categories available when it comes to general design, but the first place to start is with the body. Here, you’ll be able to choose from various styles, including Chrome, Custom Colors and Hydro Dipped colors. We went with The Origin of Chaos, because it sounds like, well, the kind of controller Thanos would play on. Or something.
From there, we added purple-ish analog sticks, buttons and triggers, to kind of complete the look. Since the design is fairly new to the team at MegaModz, they haven’t debuted any mods to the controller just yet. However, they are in the works, with potential chips that could assist the way you play certain titles – like, for example, Call of Duty: Black Ops Cold War. 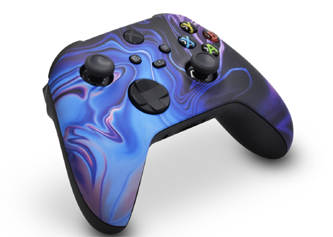 You can also adjust grip panels and even add extra accessories, like thumb grips, in case you really want to be a professional. But we stuck with the general design here, placing our order and patiently awaiting the arrival of the controller.

Feels Like A Dream
The first thing we noticed with the review model of the controller is how nice it feels. Now, we went with the hydro dipped design, which is a little fancier than the general skin, so your choice may vary. But it’s surprisingly smooth, fitting in with the slightly rough feel on the back so that it grips comfortably, even during long sessions of play. We spent a few hours enjoying Marvel’s Avengers and Black Ops Cold War without missing a beat, and didn’t really need to adjust too much with classic Xbox 360 games either, like Split/Second and Pure.
The build of the triggers and analog sticks is also excellent. They’re right up there in quality with the original parts Microsoft had in mind with the Xbox Series X. For that matter, the D-pad is also top-notch, with presses determining the right layer of movement just as the original D-pad did. Granted, we still prefer that cool rotational pad that came with the Xbox Elite controller, but that’s just a personal choice. 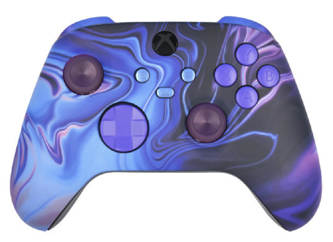 The controller also syncs up beautifully with the system, just as a regular model would; and it plugs right in with headphones without missing a beat. Plus the other center buttons react as you’d expect, so there’s no lapse in performance. It’s just a great-feeling controller overall, especially with the smoothness. Even during frantic sessions, you’ll never come across any danger of the controller slipping out of your hands.

And The Price…
The only real downside here is the price of the controller. As we mentioned above, a typical MegaModz pad, depending on what selections you make, could run twice the price of a regular Xbox Series X controller. That might be too rich for some wallets. However, being able to pick your own custom design is a nice touch here (with several available), and the parts put into each controller are right up there with Microsoft’s. There’s no question you’ll get your money’s worth here.
Plus the turnaround time is pretty quick with orders, as we got the one we ordered just about a week out. That’s not bad, considering companies usually take their time to put them together.
It shows a great deal of efficiency, without any kind of lapse in the product. That’s impressive.
So if you’ve got the money – or you just want to lend a personal touch to your Xbox Series X controller – then MegaModz is definitely the way to go. And the product will eventually get better, with the introduction of mods and maybe even more skins to choose from. We wouldn’t mind getting something for our player two…
(Thanks to MegaModz for sending a controller to us for review! You can visit their website here, and see what other controllers they have available for purchase!)
Want to win a PlayStation 5? Here’s your chance!