The Hunt is on.

Ever since its launch back in 2018, The Crew 2 from Ubisoft has flourished with an abundant amount of free content. And it continues today with an all new episode launching across all platforms, aptly named The Hunt.
According to the official game page, the new event offers a new take on the classic Chase mode, and introduces a number of new vehicles. Players will go up against the rogue group The Masked, stopping them from robbing the private bank Vault Corp.
You may recall in the last episode, when you played a member of the company’s Interception Unit to take down the outlaws. But this time, in Episode 2, you’re headed onto their turf, and the ride will likely get a little…bumpy. Fortunately, you’ve got some new Enforcer trucks to lend a hand, so you’re ready for it! 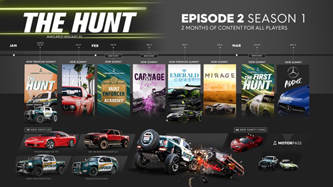 The event will feature 8 new PvE Chase activities, including Rally Raids and Rally Crosses, and you’ll be able to pick and choose what you want in the Activities menu. There will also be an Episode 2 Motorpass up for grabs, with access to a new Premium Summit – Emerald Coast – down the, ahem, road.
The trailer below gives you a good idea of what’s in store. And, yes, the game runs on PlayStation 5 and Xbox Series X as well, looking better than ever.
The Crew 2 is available for Xbox One, PlayStation 4 and PC. While the Motorpass does cost a little extra, the Episode and its general content are free of charge!
Want to play this game on an awesome new PlayStation 5? We’re giving one away!