It’s hard to believe that it’s been over ten years since the platforming indie darling Super Meat Boy made its debut, challenging gamers with its over-the-top action and ridiculous boss battles.
What’s even more hard to believe is that it took that long for a sequel to arrive. Super Meat Boy Forever changes things up a bit from the first game. You’re still getting from point A to point B on levels while trying to rescue your youngling from the clutches of a vile baby in a robot suit (we wish we were making this up), but this time, the game has adapted to an endless running style engine, where you can duck under objects and even punch enemies while you race to the goal. Of course, you may die dozens of times along the way, but that seems to be par for this course.
So does the long-awaited sequel live up to the hype? Well, in some ways, sure. But in others, it seems to be dragging – especially when it comes to levels that are maddeningly difficult to beat.
We’re talking stuff that would make those that ripped through the first game gnash their teeth on a new level.

Over 70 Levels To Meat-Grinding Hell
Like the original, Super Meat Boy Forever has a decent variety of levels, laden with death traps, enemies and an insurmountable number of saw blades. As a simple little slab of meat (either Meat Boy or his beloved Bandage Girl), you’ll venture through these areas, reaching your beloved Nugget only to come up just short and have to run through the next space. 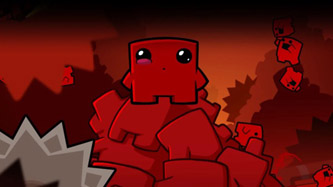 The levels themselves are neatly designed, sometimes with more than one path to get to the exit and move on to the next stage. But the thing is, even if something looks accessible, it can be quite tough to get there. The devs behind Forever aren’t kidding around when it comes to bumping up the difficulty. In fact, we’re still trying to get the best ending in the game, and we’ve had this for a while.
That’s not to say everything’s a failure, though. While there are some maddening levels that take forever to get through, the boss stages are on a whole new level. You’re given some creative means here to bring them down, and though it can take quite a few tries, you feel some sheer satisfaction from defeating them. Let’s just hope you can stick with the game long enough to see them, because…man.

It’s Rough, But It Looks Sweet
One benefit that the developers behind Super Meat Boy have learned over the last decade is how to give the game a more defining art style. Forever looks leaps and bounds over the original, with well-shaded characters and, again, demonic level design that really brings the best – and maybe even the worst – out of players. The game runs at a nice, speedy pace (save for some later levels, where a slight bit of slowdown pops up); and the cinematics are cute and humorous, right on pace with the first game. 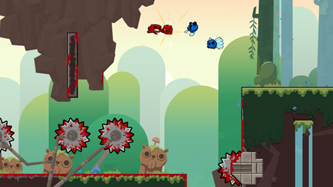 I also like the hard rockin’ music that Forever has to offer, right in step with the original Meat Boy’s soundtrack. And on top of that, the sound effects and announcer are, ahem, as meaty as they get.

If You’re Up To The Challenge, Here It Is
Let’s just put it out there – Super Meat Boy Forever isn’t going to please everyone. The game’s insane difficulty curve will turn off a lot of players the first hour in, forcing them to give up instead of seeing the, ahem, meaty parts of the game. But those that stick it out may find the challenge to be worth it, particularly with the stupendous boss battles and some clever moves added to each character’s arsenal. The art style and sound are worth noting as well.
So if you can shrug off a few hundred deaths and don’t mind seeing a beefy hero shredded along the way, Super Meat Boy Forever just might feed your appetite. Otherwise, the gristle might be too much to bear. It might even take you another ten years just to see it all through.

Want to win a PlayStation 5? Here’s your chance! 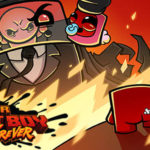