The in-game event launches this week.

COVID-19 may have put a stop to in-person competition, but a virtual one lives in in the world of Tom Clancy’s Rainbow Six Siege.
Ubisoft has announced the return of the Road To Six in-game event, which is set to kick off on January 21st and run through February 22nd.
During this time, players can check out the returning Stadium map, which features elements from both the Border and Coastline maps. In addition, all the in-game Operators will be available through a three-minute, three-round unranked Plant Bomb, with Pick and Ban mode. 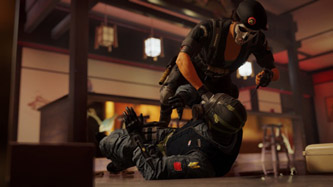 This all ties in with the Six Invitational 2021 Battle Pass, which is available for purchase now.
Purchases from this DLC will go towards the overall prize pool for the Road To Six. It’s available for 1200 R6 Credits, and features both one Free track and one Premium track. It also comes with 100 tiers (!) and 135 rewards, available up until February 22nd. Players certainly have their work cut out for them, but they’ll be given exclusive gear and other goodies both for themselves and their Captains.
Ubisoft noted in a press release, “The Six Invitational is the biggest and most anticipated Rainbow Six Siege event, celebrating a year of Siege with the fans and community. Taking place from February 9th to 21st, the competition is the pinnacle of the Rainbow Six Siege competitive season and features the best teams in the world, all vying for the Championship title and a share of the prize pool. This year, the Six Invitational will gather 20 teams, competing in a LAN environment in Paris, France. The competition will follow strict sanitary measures, in line with guidelines from health organizations and local authorities. For safety reasons, there will be no audience on site. Rainbow Six Siege fans will be able to connect digitally on Twitch and YouTube to witness the best teams in the world face off, celebrate the community, and discover the Future of Siege through developers’ panels.”
Those that want to learn more about the event can do so on the official Rainbow Six Siege page.
The game is available now for Xbox One, PlayStation 4 and PC; and upgrades are available for Xbox Series X and PlayStation 5.

Want to play Rainbow Six Siege on a shiny new PlayStation 5? We’re giving one away!