Soon it’ll be time to get groovy.

When the Ash vs. Evil Dead series was (sadly) cancelled about three years back, Bruce Campbell said he was hanging up the boomstick and chainsaw of “hero” Ash Williams for good, after having so much fun with the character. But, apparently, that promise didn’t last too long, as he’s making a comeback in 2021.
Not that we’re getting a new movie (not yet, anyway), but Ash and the gang will return in Evil Dead: The Game, an all-new co-op supported outing coming our way from Saber Interactive, the developers of the highly addictive World War Z.
Initially hinted at with a teaser trailer at The Game Awards (which you can see below), Evil Dead’s story hasn’t been revealed just yet. But it will come with quite a few familiar faces, as well as the ability to rip apart deadites with up to four people on a team. Needless to say, that sounds pretty groovy to us.

Some Familiar Favorites
As expected, Bruce Campbell is back on board, voicing Ash with just the right amount of gusto that we’ve expected since the debut of the original The Evil Dead over three decades (!) ago.
But he’s not alone, as the game will feature a number of other characters from the universe. 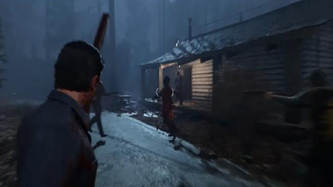 For instance, Richard DeManincor will portray the role of Scotty from the first film, while Marcus Gilbert will return as the hapless yet heroic Arthur from the third movie in the series, Army of Darkness.
However, if you’re a big fan of Ash vs. Evil Dead, there’s even more good news – a Ghostbeaters reunion! A couple of weeks ago, Dana DeLorenzo confirmed that she’ll return as Kelly Maxwell, while, just a few days later, Ray Santiago also announced he’ll be voicing the character of Pablo Simon Bolivar once again.
It’s unknown if any further characters will show up, like Evil Ash from Army of Darkness, or, hey, fingers crossed, Lucy Lawless’ Ruby Knowby. But, for now, there’s a pretty full deck of characters to play with, and they aren’t going to hold back when it comes to fending off the evil that awaits them. Just keep the Necronomicon nearby, yeah?

Carnage Awaits
Don’t expect Evil Dead to hold back on its bloodshed in video game form. Boss Team Games, working alongside Saber Interactive, confirmed that it’ll be an “over-the-top experience.” That means all sorts of arterial sprays, zombies being sawed in half and, of course, the boomstick shotgun doing its dirty work.
The developer described the game, explaining. “Work together as a team of four survivors, exploring, looting, crafting, managing your fear, and finding key artifacts to seal the breach between worlds. Or take control of the powerful Kandarian Demon to hunt Ash and his friends while possessing Deadites, the environment, and even the survivors themselves as you seek to swallow their souls.”
But that isn’t all. “Plenty of surprises await in this gore-filled battle against evil that captures the characters, horror, humor, and action from the franchise. Battle across memorable locations including the infamous cabin in the woods, brought to life with tons of terrifying visuals and all-new dialogue from Bruce Campbell. Discover more than 25 weapons, including Ash’s Gauntlet, Boomstick, and chainsaw, and advance in a variety of skill trees to grow stronger and survive in this fun co-op and PvP experience.”
It sounds as if Evil Dead will have sorts of awesome goodies for your arsenal, so you can lay waste to enemies however you see fit. Preferably before they swallow your soul, natch.

A Demon For The Party
Evil Dead: The Game isn’t just about the humans having a good time. In pure Dead by Daylight fashion, one player will be lucky (?) enough to portray the Kandarian Demon. They can carve out a battle plan in their own right and set loose enough Deadites to keep the quartet of heroes busy. The real question is who will survive the onslaught.

While the game’s still well in development, the trailer, which you can see below, paints an exciting yet grim picture, with the heroes battling insurmountable odds to keep the evil dead from taking over. That is, if they can.
And what’s more, the party is due for various consoles and PC. This includes the Xbox One and Xbox Series X; PlayStation 4 and PlayStation 5; and even the Nintendo Switch. There’s no word if the games will feature CrossPlay support, but considering how popular a feature it is, we’re pretty sure it’s under consideration.
We don’t know exactly when Ash and the gang will make their debut, but we do know it’ll be sometime this year, so the wait won’t be too excruciating. That gives you ample opportunity to catch up on the three seasons of the awesome show, and the cult trilogy as well. Soak it all in and prepare for a hell of a time when Evil Dead: The Game makes its debut. And it’s not a trick.
But… do get an axe.

Want to win a PlayStation 5 to play Evil Dead on? Here’s your chance!