An arcade system to be proud of?

There are a number of plug-and-play systems out there that are trying to simplify the experience of enjoying classic games at home. But very few do what the Legends Gamer Mini is, packing the arcade experience in with an actual fight stick-style control panel which replicates how they actually played.
When AtGames sent this our way for review (thanks, guys!), it took a little bit of time to set up.
That’s because the controller itself that the package comes with connects to another unit, instead of hooking up to a television directly. What’s more, the unit, known as the Legends Gamer Core, actually doesn’t have a power switch, so you have to unplug it when it’s not in use. But once you get it set up, you can enjoy 100 different titles, including many arcade favorites and even a few home titles.
How does the experience measure up overall? Well, it really depends on your taste of arcade games. This offers fewer than other Legends Gamer systems on the market (most notably the Ultimate, a stand-up unit that features 300 titles in itself), but there’s still more than enough variety to enjoy here. It just depends on how much arcade experience you’re looking for.

The Games
The Legends Gamer Mini comes with an impressive list of titles from Taito, Data East, and a few classic Disney titles, like Disney’s Gargoyles from the Sega Genesis library and the entire trilogy of Super Star Wars games. There’s some notable favorites here, including Zombies Ate My Neighbors, Elevator Action (and its oddball sequel, Elevator Action Returns), Bad Dudes vs. Dragon Ninja and many others. 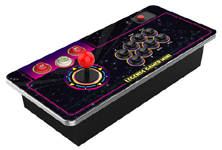 Not all of these are classics, though. Some games, like Pinbo and Lunar Rescue are on the forgettable side. However, playing with a number of these titles, I did find a majority to be enjoyable, and offer up something for everyone, be it racing, action or even first-person shooting. (They work better with a light gun, though. Just saying.)
The emulation is fabulously done, even though it feels like the timing can be micro-seconds off at first. Once you get into the groove, however, there’s hours’ worth of fun here. And that’s before you give ArcadeNet a try.
With this service – which costs $20 a month – you can access even more gaming favorites, namely from SNK and even Stern Pinball. There’s some good stuff here, and the online handling is really well done, based on what we’ve tried. It all depends on how many arcade classics you want to enjoy. The core 100 games are fine in themselves, but you can really open up the system if you want. There’s also modding assistance, as you can plug in your own USB with ROMs, should you prefer that route.
One other great feature is being able to modify button set-up and video settings with each game. You can just pause and change configurations however you see fit. It’s awesome, and you can even add the classic vector lines to certain games, should you want that old-school look.

The Feel Of An Arcade Game
Perhaps the most impressive thing about the Legends Gamer Mini is the joystick itself. It’s built with quality parts, like you’d find in a typical arcade game; and it handles very well. Some games, particularly driving ones, do feel a bit strange; but the general consensus is that AtGames has recreated the arcade experience for a great price. And there’s additional features as well, like a rewind button (in case you make a mistake) and a quick select screen, where favorite games can be sorted for you. 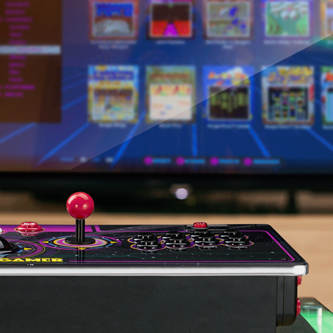 There’s just one thing, though. As I mentioned above, it can take a bit to get this set up. That’s because the Bluetooth connectivity between the arcade stick and the Core unit can take a while to figure out. Fortunately, there is an instruction manual, and after you follow its steps, you should be able to play in just a few moments. Just don’t expect the convenience of, say, a SNES Classic. With online connectivity, there’s additional steps to follow here. Not the end of the world, though.
Oh, and if you fancy the pinball games offered in ArcadeNet, there’s expansions on the side where you can add accessories that feel like flippers. Sadly, we didn’t get a chance to try these, but it’s a neat idea, especially for those that want their games to feel more like the real deal.
Hopefully we’ll see more of these tables offered in the future, to make it more worthwhile.

A Good Arcade System That’s A Step In The Right Direction
While the AtGames Legends Gamer Mini isn’t the ultimate product that the company offers, it is the most affordable, coming in at a reasonable $129.99. And although every game in the package isn’t a hit, most of them offer solid entertainment, and with excellent controls and emulation to boot. ArcadeNet is nice as well, but isn’t entirely necessary if you just want something quick and fun to play with your kids and friends.
It just really depends if you need an arcade experience. But if you appreciate a well-done one – like I do – then the Legends Gamer Mini is worth the investment. And, hey, you can totally save on those quarters!
(A review unit was sent by AtGames for consideration.)

Want to win your very own PlayStation 5? Here’s how you can get one from us! 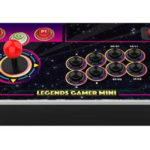