We lesbians it all over again.

It almost seems like forever ago that we initially lost the game based on Edgar Wright’s Scott Pilgrim vs. the World film. That’s a shame, because it continues to be one of the most stylish – and difficult – brawlers out there, featuring a majority of characters from the movie.
But then, lo and behold, on the game’s tenth anniversary, Ubisoft announced a re-release for current consoles and PC. And it’s finally arrived in all its pixel-based glory. Hopefully it’ll stick around a little longer now, especially considering that Complete Edition brings everything it can to the table. While some new characters (like playable Ex’s) would’ve made this a real gem, what remains is a game that even the most jaded Scott Pilgrim character might enjoy. Maybe even Aubrey Plaza’s grumpy Julie Powers. (Maybe.)

A Good Kind Of Beating
Throughout the game, you’ll journey across a Super Mario style map, revisiting levels you’ve beaten before while opening up new ones. You’ll also be able to unlock new shops and challenges, where you can pick up items and earn extra coins (achieved by beating up foes, River City Ransom style – but without the “barrrrf”) as you proceed to challenge all of Ramona Flowers’ evil exes. 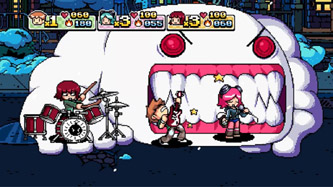 The beat-em-up action continues to be refreshing and exciting after all these years, as you unlock new moves while you progress, including neat little mid-air stomps and grab moves that let you obliterate foes within a few hits. You can also select from six playable characters, as Scott’s buddy Wallace and Knives Chau are fully playable, initially only offered as DLC. Each one brings phenomenal moves to the table, particularly Ramona, who can actually pull random items from her bag.
Scott Pilgrim also supports co-op, in both local and online play. Online sessions can take a little bit of time to set up, but you’ll want the support of your friends to help you out there. That’s because the enemies can be obnoxiously cheap at times, like the stuffed dinosaurs and robots that surround you in the game’s second level. You may yell in frustration, but as you buy items, you’ll gain experience and soon gain the upper hand. Still, if you have others around, don’t be afraid to have them join the party – they can even save your butt when the chips are down.

The Presentation Holds Up Beautifully
While Scott Pilgrim’s visuals and sound may be from 2010, they remain just as wonderful – and vital – this year. That’s because the hand-drawn 16-bit style visuals eschew a certain type of charm, along with the fun backdrops and creative enemy design. Plus, each evil ex boss offers something phenomenal, particularly Lucas Lee and his all-too-ready stunt team. The game performs wonderfully throughout, never missing a beat and even offering some joyous cinemas in-between stages – along with multiple endings that offer a laugh or two. 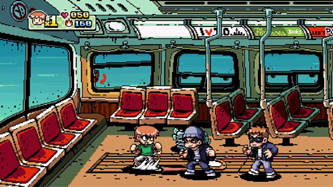 All this is backed by a terrific soundtrack by Anamanaguchi. It continues to stand the test of time, with a number of memorable tunes that are worth a listen, especially if you have headphones. Combined with the old-school style sound effects, the whole thing is worth a listen.

And Extras To Spare!
While Scott Pilgrim doesn’t have any new playable characters (as we mentioned above), there are some new modes that are quite noteworthy. Initially only unlockable as code unlocks, you can now enjoy the wicked Boss Rush, along with a mode where you can pulverize zombies. 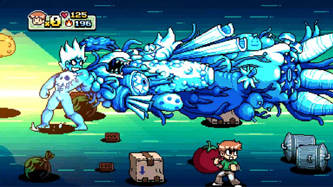 There’s also a dodgeball mode that’s surprisingly enjoyable, and a little reminiscent of the old days of Super Dodge Ball from Technos. And you can totally bring friends to play with.
All this comes for the low price of $14.99, which isn’t too shabby at all. The only downside is that there’s no physical version immediately up for grabs, although Limited Run Games will eventually release one this year – and though higher in price, it definitely looks to be worth it.

It’ll Rock Your World
It’s amazing how a game that’s a decade old continues to fit in today’s gaming scene without missing a beat. Though challenging, Scott Pilgrim vs. the World: Complete Edition is a rousing tour-de-force in beat-em-up action. It doesn’t let up on the thrills or the style, and it also has one of the best gaming soundtracks out there. Get your friends together and go lesbians over it!

Want to win an PlayStation 5? Read here on how you can win! 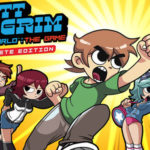