It’s been well over two decades since Mortal Kombat graced the big-screen, with the last effort, Annihilation, leaving a bad taste in fans’ mouths. Granted, we’ve since seen other programs based on the hit video game franchise, including the spin-off Mortal Kombat: Legacy series. But now, it’s headed back to theaters and HBOMax this April, and it’s more true to the Kombat theme than ever before.
Entertainment Weekly recently posted a new story, showing off a first look at Simon McQuoid’s upcoming reboot film. We’ve included several scenes from the movie here (from EW), and it shows off some of the characters in action, including Liu Kang, Kung Lao, Jax and an ominous peek at the ice-cold Sub-Zero. 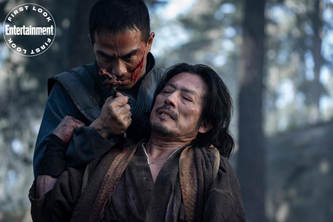 Produced by Todd Garner and James Wan, the film focuses on the blood feud between the Bi- Han and Hanzo clans, but eventually focuses on familiar characters, including good ol’ Scorpion,
who engages with Sub-Zero in “a pretty nasty hand-to-hand combat” situation. From there, as you might guess, it unfolds into a modern-day story, one involving a newcomer by the name of Cole Young (played by Lewis Tan). He bears an interesting symbol on his chest that hits at the Kombat to come.
Other characters come into play as well, like Sonya Blade and Lord Raiden, as well as the vicious criminal Kano.
Speaking with EW, McQuoid explained how serious he’s taking the film’s tone, so it matches up with the bloodiness of the video games. “I wanted to make sure that everyone respected the material, the lore of Mortal Kombat, the fans and the love they have for this. Everyone was clear on it,” he explained. 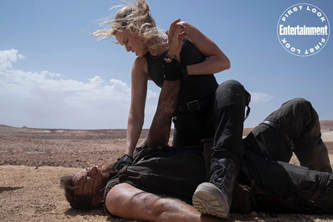 He also noted that the fights are going to be something else – and they aren’t going for a PG-13 approach. “We need to be smart about how we go about [the fights], and there are times, you’ll see when you see the movie, when it’s just, ‘F— it! Let’s have some fun.'”
You can read more about the movie here, but this definitely looks like something that will please MK fans. Rubber monsters be damned.
We’ll let you know when the trailer posts. In the meantime, get ready for April 16, because that’s when Mortal Kombat debuts on HBOMax and in theaters.
Want to win a PlayStation 5? Here’s your chance!