A next-gen update will arrive, but not for a while.

Ever since the game launched last month, Cyberpunk 2077 from CD Projekt Red has faced a myriad of problems, namely on last-gen consoles. Xbox One and PlayStation 4 owners experienced glitches and performance issues that were so bad, Microsoft and Sony began offering refunds with no questions asked. And there’s everything from threats of large fines to potential lawsuits making the rounds too.
With that, the co-founder of the developer, Marcin Iwinski, decided to go on record to discuss the game’s problems, as well as what his team is doing to right the wrongs. The full video is below, but here’s some of the details you should take note of…
Iwinski explained that a lot of focus went into the stellar PC version of the game, which continues to be a hit seller on Steam. Unfortunately, as a result of this, the Xbox One and PlayStation 4 versions suffered setbacks, resulting in a number of performance issues and glitches.
“The console version of Cyberpunk 2077 did not meet the quality standard we wanted it to meet,” he explained. “I and the entire leadership team are deeply sorry for this, and this video is me publicly owning up to that.” He also told fans not to “fault any of our teams for what happened,” as they were already feeling the crunch as it is.

That said, the team has laid out a timetable, featured below, that will bring a number of
updates to the game on consoles. 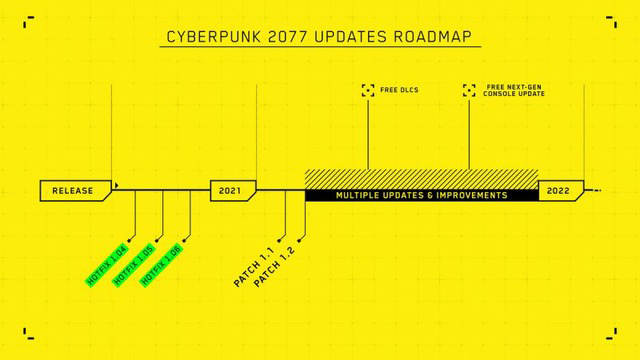 The first one is actually due out in about a week and a half’s time, expected to squash some of the more severe bugs within the game. The second will follow sometime in the next couple of months, though it could come sooner. Over the next few months, updates will continue to come to the game. In addition, the pre- announced story download content should arrive, and will be completely free of charge to those that purchase the game.
Finally, a next-gen update is in the works, set to take advantage of the Xbox Series X and PlayStation 5 hardware. Unfortunately, it won’t arrive until sometime in late 2021, as the team
wants to take its time and make sure it’s the best it can be.
So, Cyberpunk fans, it’s just a matter of being patient as the game eventually becomes what we all want it to be. The real question is if you can wait that long.
Cyberpunk 2077 is available now for PC, Xbox One and PlayStation 4.

Want a free PlayStation 5? What luck, we’re giving one away!