Play them while waiting for Bethesda’s release. 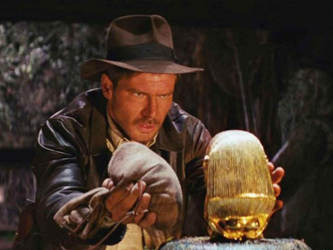 For years, the Indiana Jones movies have entertained millions, with Harrison Ford delivering a top-notch performance across four films, including 2008’s Indiana Jones and the Kingdom of the Crystal Skull. (A bit silly, sure, but he has fun with the role anyway.) Likewise, we’ve also seen some entertaining video games over the years featuring the man in the Fedora as well – and Bethesda recently announced that they’re working on a new game, with the Wolfenstein developers at Machine Games at the helm. (That’s right, the guys that make games about kicking Nazi butt are at it again!)
So what Indiana Jones games can you enjoy while you wait for the new one to surface? We’re glad you asked, because we’ve hand-picked a number of favorites that will have you throwing around idols and shooting swordsmen like crazy.

Lego Indiana Jones: The Original Adventures
In 2008, LucasArts, who was still around at the time, released a Lego-themed Indy game, developed by the team at Travellers Tales. This one pulled off a nice trick, recapturing the magic of the original three films while, at the same time, adding lots of Lego-infused laughs for all ages to enjoy. In addition, the game also features co-op support, so friends and family can play together if they choose. (Just remember, only one person can play Indiana Jones at a time.) This one’s backward compatible on Xbox One, and also available for PC, PlayStation 3 and Nintendo Wii. It’s well worth checking out, along with the quasi-sequel, Lego Indiana Jones 2: The Adventure Continues.

Indiana Jones And The Fate Of Atlantis
Back when LucasArts was still in full swing in the 90s (and using the SCUMM adventure game engine), it produced a walloping original adventure featuring Indy called Indiana Jones and the Fate of Atlantis. Based around the writings of Plato, the game delivered with fun point-and-click tactics, as well as a great story – which later became the basis for a special Dark Horse Comics series. For good measure, an action game was also released around the same time, for those who preferred a more visceral experience. But the true genius lies with the original, if only because we really don’t see games like these anymore. You can get it for PC, as well as on the Nintendo Wii release Indiana Jones and the Staff of Kings, where it’s an unlockable.

Indiana Jones And The Temple Of Doom Arcade Game
Back in the 80s, Atari knew quite a bit when it came to producing arcade hits. Indiana Jones and the Temple of Doom is no exception, a fast-paced affair where you rescue children, whip bad guys, ride around in mine carts and eventually bring down Mola Ram. Short but sweet, Temple of Doom remains a timeless classic, with its synthesized speech, fun visuals and enjoyable gameplay. It’ll be tough finding it in an arcade these days, but should be fairly easy if you have access to an emulator.

Indiana Jones And The Staff Of Kings
While Indiana Jones and the Infernal Machine isn’t too shabby – especially on Nintendo 64 – there’s something about the follow-up, Staff of Kings, that’s a bit more fun. Perhaps it’s the way that the developers at Artificial Mind and Movement managed to incorporate Tomb Raider elements around Indy; or maybe it’s just the old-school charm the game eschews around every corner. You can check it out now for Nintendo Wii and PlayStation 2, or, if you feel like taking it on the go, it’s available for Nintendo DS and Sony PlayStation Portable as well.

Indiana Jones’ Greatest Adventures
While the developers at Factor 5 are synonymous with some of the best Star Wars games out there (namely Rogue Leader on the GameCube), it also tried its hand at the man in the Fedora on the SNES way back in 1994. Indiana Jones’ Greatest Adventures is a side-scrolling tour-de- force, featuring great visuals, exciting music (particularly the theme, which is as perfect as you can get on the SNES) and fun, albeit slightly stiff gameplay. There are vehicle stages as well, including a fun recreation of the mine cart sequence in Temple of Doom. This one’s a little tougher to come by, but if you manage to track down a cartridge, it’s a treasure you’ll hold onto forever – even while you’re being chased by a large boulder.

The Cancelled Indiana Jones Game
In 2007, Lucasarts was set to continue the adventures of Indiana Jones on the PlayStation 3 and Xbox 360, but not in Lego form. Instead, it was producing a new adventure, one that utilized the now-lost Euphoria game engine. The game, simply going by Indiana Jones, looked like it had promise, particularly with a fistfight taking place atop cable cars in San Francisco. Alas, the game never came into fruition, as it was cancelled in the midst of its development. Still, Bethesda might be taking notes here, as its entry in the Indiana Jones lexicon could take a similar route. Think they’ll get Harrison Ford?

Want to win a PlayStation 5 on the house? Here’s your chance!