After completing work on the fantastic (and underrated) Batman: Arkham Origins for various consoles, WB Games Montreal pretty much went silent. Sure, it had some DLC to keep fans busy, particularly with its single player content. But aside from that, we haven’t heard a peep from the company in some time.
Until last September, that is. During the DC FanDome, we got a first look at Gotham Knights, a new adventure game in the vein of the previous Batman games. Only there’s one particular catch this time around – Batman appears to be dead.
But there are four heroes stepping up in his wake, each with their own special powers. And they’ll need them as well, since sinister forces are threatening to tear Gotham apart. Here’s what players can expect when the adventure arrives sometime this year.

A Quartet Of Different Heroes
While the general scope of Batman may remain intact here, there are four unique characters, each with their own combat style. Red Hood prefers to let his guns do the talking, though he shows brute force as well; Robin and Nightwing each bring something to the table with their spectacular abilities; and Barbara Gordon, aka Batgirl, finally gets to shine with her own techniques and athleticism.
With each character comes a separate XP progression system, enabling you to level each one up in their own special way. This includes opening up new techniques and strengthening melee moves to their maximum potential. They should come in handy, especially as you encounter bosses in the game – like Mr. Freeze, who appears in the gameplay trailer below, ready for a fight.
You can also craft new gear for each hero, creating an arsenal to choose from as they progress further into the game. How you get a hold of these goods isn’t known yet, but more than likely you pick them up as you beat up thugs and complete missions throughout Gotham.

A Huge City To Explore
While the previous Batman: Arkham games had massive worlds to explore, Gotham Knights looks to go one step further with its ecosystem. Along with watching out for innocent civilians, you’ll have to deal with roving gangs, keep an eye on the local Gotham police force, and also deal with the gallery of villains that aren’t too fond of Batman. And then there’s the Court of Owls, a devastatingly powerful group that have their own agenda in the face of the Dark Knight’s demise. 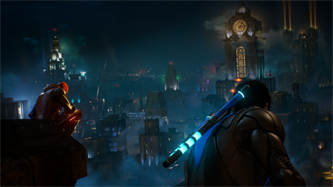 It’s up to you to decide how you want to get around the city, whether it’s swooping through the sky, using your grapple gun to reach new heights or even taking the Batcycle for a spin, watching out for traffic trouble while pursuing enemies.
There’s a lot to uncover, between main missions that the characters will follow, as well as secrets to locate – par for the course for a good Batman game. And not to mention you should be able to team up with friends as well, as Gotham Knights looks to support co-op. Who says you can’t form your own Justice League?!

A Swell-Looking Adventure
Though there’s still a little bit of work to be done before its release, Gotham Knights looks really good thus far. WB Games Montreal continues to dial in what makes the city click so well, as it did in Origins, with a spectacular landscape to explore. On top of that, it also has each character’s signature animations looks sharp, right down to the finishing takedown moves to defeat each foe once and for all. The lighting also appears to be right on target, and the use of color is far more notable than it was in Origins – not that it was a bad-looking game, just a bit on the “wintery” side in terms of appearance.
Plus, the voice acting looks to be razor sharp, with each character showcasing a personality to go along with their move sets. That, and the ambient sound effects really bring you that much further into Gotham.

We Are The Night
Though there’s still no final release date for Gotham Knights just yet, it is ready to make its debut sometime this year for both PlayStation 4 and PlayStation 5, as well as Xbox One, Xbox Series X and PC. No matter what platform you prefer, some butt-kicking Bat goodness awaits.
And if it’s on the same level – or even beyond – what Origins delivered, we’re in for a pretty wild weekend or two.