Pre-order for Switch and PS4 next week.

So you might have seen our story a little while back talking about the return of Ubisoft’s Scott Pilgrim vs. the World, coming in a new Complete Edition next week on consoles and PC. But there was also some inquiry about a physical version of the game. Well, we’re happy to report that it’s officially happening. 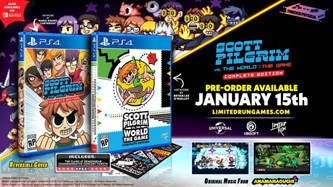 Today, Limited Run Games announced that it will publish physical editions of the cartoony beat-em-up, with pre-orders opening up next week. They’ll be available for PlayStation 4 and Nintendo Switch, and there will be a number of editions available.
First up is the standard edition of the game, which will feature artwork by Mariel Kinuko Cartwright with a reversible cover. It’ll feature a physical copy of the game, along with two commemorative Clash at Demonhead concert tickets for you collectors. Though a price point wasn’t given, it’ll likely be around $34.99. 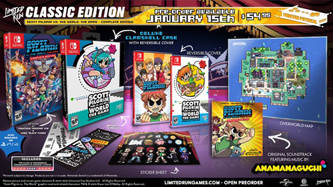 Next up is the Classic Edition, which will sell for $54.99. It’ll feature artwork by Bryan Lee O’Malley, the original creator of the comic book, as well as a special slipcase cover, a number of stickers, an overworld map and a soundtrack from Anamanaguchi on CD. It will also come with the concert tickets.
Finally, there’s the motherlode, the KO! Edition of Scott Pilgrim. Going for $139.99, it’ll feature a Roadie Collector’s Case with lights that shine down on band members as they take the stage, with an original sound clip from Anamanaguchi included for good measure. It also includes the same goodies as the Classic Edition, along with collectible Evil Ex cards and a special Enamel Pin.
Oh, and drumsticks and guitar picks for you music lovers as well. 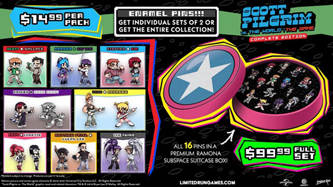 On top of that, a set of Enamel Pins will also be available for separate purchase, going for $14.99 per set.
You can check out the pre-order page over on Limited Run Games. They’re likely to go fast, considering the popularity of the game, so do not hesitate. That way, you’ll own it forever, just in case it might get delisted again.
Scott Pilgrim vs. the World: Complete Edition releases on January 14 for Xbox One, PlayStation 4, Nintendo Switch and PC.

Want to win a PlayStation 5 or Xbox Series X? Here’s your chance!