After a slight delay from when it was initially supposed to reveal earlier today, SNK went ahead and debuted a new trailer for its newest chapter in the King of Fighters series. And, as expected, King of Fighters XV looks to live up to the hype – and then some.
Though the trailer is a bit on the brief side, it provides a first look at what kind of action awaits fans, with crisp, clean visuals, a number of returning characters, and the bravado 2D fighting gameplay fans have come to expect.

Some Familiar Favorites… And New Faces?
Though the full cast didn’t quite make their debut in the King of Fighters XV trailer, there are a few returning ones that can easily be recognized. 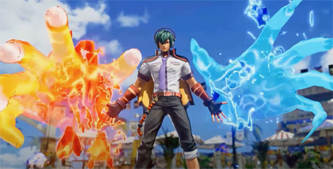 For instance, Mai Shiranui, one of the most notable entries in the series, will return. In addition, Shun’ei, Leona, and Benimaru are also making a comeback. And don’t be surprised if a few others, like Terry Bogard, return to the action as well.
There are hints of gameplay sprinkled in the trailer, as you can see below. However, SNK is holding off showcasing what’s in store until next week, when a more in-depth behind-the- scenes look at the game will debut. King of Fighters XV is set to arrive sometime this year, though platforms weren’t mentioned. (The PlayStation 5, however, seems like a very safe bet.)

There’s More Where That Came From
In addition to King of Fighters XV, SNK also laid out plans for what else is in store for the new year.
First off, the hit PS4 fighting game King of Fighters XIV will be getting an Ultimate Edition, which bundles together previously released content as a “director’s cut.” This includes the general game, along with eight downloadable bonus characters, 10 DLC costumes and 10 themes for use with the PlayStation 4. The game is set to launch digitally on January 20th here in the US, though a price point wasn’t given. However, it’s available now in Europe. 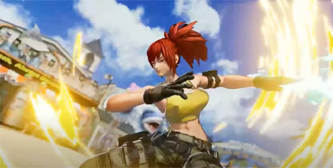 Next up, some classic King of Fighters action will also arrive on the PS4 this year. King of Fighters 2002 Ultimate Match will debut digitally on the platform, complete with a rebalanced fighting system, improved online net code and tweaks to the visuals and sound. There’s no word on an exact date or pricing just yet, but we should know more soon.
Finally, the revamped Samurai Shodown will see a new season of content, set to kick off this March. Four new fighters will enter the fray, along with a few other updates to keep fans of the game pleased.
First up is Cham Cham, a veteran from Samurai Shodown II. She’ll make her return with boomerang in hand, ready to jump on the opposition.
Also debuting in the series is Hibiki Takane, who previously appeared in The Last Blade II. There’s no date for his arrival yet, but it should be sometime this summer.
Two more characters will debut after that, though they haven’t been revealed just yet. SNK will likely let us know around summertime.
Check out the full presentation below, and prepare for SNK goodness throughout the year!

Platforms: To be announced

Want to win a PlayStation 5 or Xbox Series X? Here’s your chance!