PowerA has a winner with this peripheral.

PowerA is no stranger to making good peripherals for systems across the board, and recently, I decided to try out the company’s fight pads for Nintendo Switch. But, for some reason, it just didn’t mesh with me. That’s not to say it isn’t a high-quality controller by any means, as it works really well with the likes of Mortal Kombat 11 and BlazBlue: Cross Tag Battle. However, it doesn’t measure up to the sheer quality of a fight stick, a controller that emulates playing a fighting game the way it should be.
And, man, the company must’ve been listening, because the next product they put out for Nintendo Switch was just that. The Fusion Wireless Arcade Stick is the perfect peripheral for those of you that want to get the sheer feeling of a fighting game in your hands. And at $129.99, the pricing isn’t too bad either, especially considering the arcade-quality parts that the controller comes with.

A Slick Design That Works Wonders
Let’s get started with the general design. The controller comes with eight SATWA-style arcade buttons, as well as a multi-directional joystick with a ball on top, akin to what you might find on several old-school machines. It also has a sturdy metal base for placement on your lap or a nearby table, and you can even set two side-by-side in case you feel like having some sort of fight night. 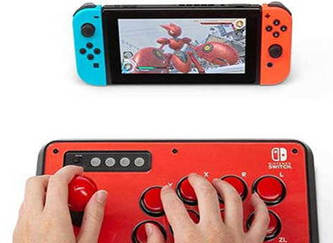 But what’s really cool is the practicality that the fight stick has in mind. You can play either wired or wireless. It comes packaged with a USB-C cable, so you can connect it directly to your Switch. On the other hand, if you want to play wirelessly, it comes with two batteries and lasts quite a few hours on that, without losing any responsiveness. Now that’s pretty neat to have.
The general feel of the fight stick is excellent, with hardly any lag – well, depending on how you’re playing online, of course. All the moves came off like a breeze, and the buttons respond very well. And not just with fighting games either – this controller does exceptionally well with shoot-em-ups like Ikaruga and Crimzon Clover, if you’ve got a hunkering for those. Don’t forget to give SNK 30th Anniversary Collection a shot as well.
Best of all, you can do a little toggling with the joystick, thanks to a switch located next to the power button. With this, you can switch functionality between D-pad, the left stick or the right stick with the joystick, depending on your style of play. Leaving it at default is just fine, but we know there are some of you out there that really like tinkering.

A Neat Design Idea
The Fusion fight stick (sorry, arcade stick) comes with a general red template, similar in color to most Switch peripherals and box art designs these days. And that’s cool, matching up with the colors of the buttons and all. But, if you’d like, you can actually change things up a bit. 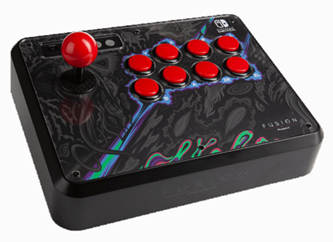 It comes with a specialty galaxy-themed layout that you can place on the fight stick by taking off the joystick and placing over the general red design. But if you really want to give that special flair, you can also design your own through the PowerA web page. You can then download and print it and place it on the joystick, choosing from any given franchises. Want to go all out and make that dream (or nightmare) Michael McDonald fight stick? Now you can. (Just look it up, we’ll wait.)
Fusion’s arcade stick also has a neat compartment in the back. Here, you can store the wired cable, which is convenient when it’s not in use or if you prefer to go wireless. We’ve seen this on other peripherals as well, but it’s a great feature that makes the Switch’s premiere fight stick worth recommending.

Another Great Controller To Add To Your Collection
For $130, the price might be a little steep for those of you that aren’t really looking for an arcade sort of approach. However, if fighting games are your speed, or you just can’t play a “shmup” with a pair of JoyCons (who can, really?), consider this a must-have in your collection.
The ability to design and print your own faceplate and work with a few options (including being able to choose between wired and wireless) is pretty awesome. Nothing beats having a little personality to go along with your planned beatdown. (Thanks to PowerA for sending along a review sample to our team!)

Want to win a PlayStation 5 or Xbox Series X? We’ve got just the chance to do so. Visit this page to learn more! 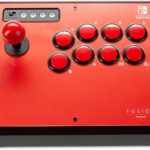