A miracle in Hell.

As wonderfully selling as the Nintendo Switch may be, it’s not the most powerful console on the market. Far from it. In fact, save for a few shining examples, it can’t really run the same games that we see on the PlayStation 4 and Xbox One.
Ironically enough, a number of these examples come from Panic Button, a small studio that specializes in porting over fantastic releases for the system. These include Rocket League and Warframe, which are still quite popular today. But its biggest client? Bethesda, who worked with the company to bring two Wolfenstein games to the platform, along with the 2016 mega-hit Doom.
Now, after a lengthy delay, Doom Eternal has finally arrived in digital format. And while some may wonder if the performance could be better and if this particular release will ever see the forthcoming DLC chapters, the core experience that remains here is breathtaking. How the Switch can run a monster of this magnitude is beyond us. Panic Button must consist of wizards over there.

Hell To Pay
The “Doomguy” has once again returned, tasked with bringing down a demonic army that is ravaging the planet. This isn’t just a few guys here and there, either. It’s a full-scale invasion with bad-ass soldiers that won’t go down within a matter of shots. You’ll need to use everything in your arsenal to turn the tide, just like a classic Doomguy would. 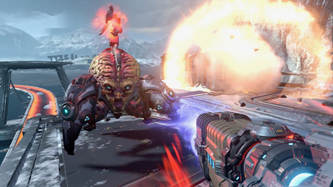 And what an arsenal it is. Along with the bad-ass weapons that are at your disposal, Doom Eternal also includes better use of the in-game chainsaw, along with perks which come from using it. A rainbow of colorful loot showers out of baddies like they were Lucky Charms. In addition, you also have a flamethrower, a grenade launcher, and, of course, the sheer ability of finishing off foes with devastating melee techniques. Even the repeat ones don’t get old.
For the Switch version, Panic Button managed to throw in gyroscopic aiming. While it’s not a complete necessity when it comes to playing Eternal, it’s a neat feature that helps immensely with accuracy and performance. That said, the traditional controls work fine as well, if you just feel like running in and clearing out room after room.
There are some platforming segments that can take getting used to, particularly as you get a hold of Doomguy’s jumping techniques. But the action that’s sandwiched in-between them are excellent, leading up to a finale that’s right up the soldier’s alley. No matter what difficulty you play on, you’re in for a demon-slaying treat.

Slightly Fuzzy Visuals Galore, But A Strong-Performing Game
One thing you’ll notice about Doom Eternal on the Switch is its slightly lowered performance.
It’s down to about 30 frames per second compared to the 60 FPS that the other versions run around. Also, the fuzzy details are noticeable, particularly if you’re playing in handheld mode. In fact, it’s easy to miss a small thing or two when you’re doing this. 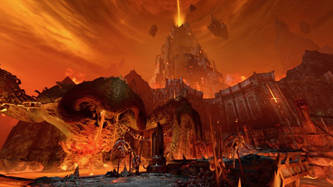 That said, the fact that the game runs at all – and this smoothly, no doubt – is something special. It maintains a steady frame rate even during the heaviest of firefights (against large enemies, no less), and the levels themselves are vast and well worth exploring for hidden goodies. The colors are wonderfully recreated on the Switch version, and the bloodshed doesn’t let up. Slight fuzziness aside, this game is a looker.
That said, there should also be a note about the soundtrack. It’s pure hard rock goodness that blares throughout, keeping you in the mood to fight your adversaries. The sound effects are exceptional as well, particularly the satisfying hum of your chainsaw. Time for daddy to let loose.

Multiplayer Works, Though With Slight Limitation
I can tell you up front that the multiplayer for Doom Eternal has changed a bit from the first, going with a general 2 vs. 1 Battlemode where soldiers take on a select demon powered to the hilt. That might disappoint those that preferred the traditional set-up. 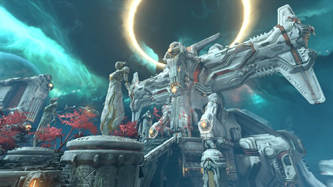 However, I’m quite pleased with how this mode turned out. And what’s more, it runs just fine on the Switch, with only a slight delay between setting up matches. I also like how the gyro controls work in this mode as well. Just be prepared to getting used to performing actions with teeny little JoyCons.
There is some adjustment to be made here.

A Hell Of A Time
Even if you already bought Doom Eternal for another platform, there’s something special about how it comes together on the Switch. Panic Button has gone above and beyond here, cramming
as much demonic action as they could into a download that’s just under 20GB – by the way, that’s actually smaller than the original Doom. The performance is great as well, mind a little blurry action here and there; and the multiplayer is well worth a try after you conquer the single player campaign.
Yes, we know having demons over for the holiday season may not be your first choice. But what better way to end 2020 than with one hell of a stress reliever…?

Want to win an Xbox Series X|S or PlayStation 5? Here’s how! 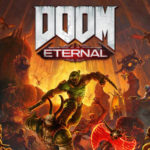