The Space Invaders franchise has been one of the first making the rounds in our industry, and continues to run strong today, thanks to retro re-releases (like the Arcade1up machine) and neat little collections. ININ Games’ Space Invaders Forever is the latest in its continuing line, with a smattering of oddball titles that are sure to suit fans of the series.
And yet, it doesn’t quite feel like Forever. That’s not to say that this collection doesn’t have merit, as it does. But it comes across as a missed opportunity instead of the ultimate tribute to the invaders themselves. It’ll do for die-hard fans, but it doesn’t quite scream “must-have” like the publisher was hoping.

What’s In The Package?
So instead of including a vast collection of games like the original Space Invaders and even strange little titles like the long-lost Majestic Twelve (remember that one?!), Forever simply features three titles. Considering that it goes for $30, it feels a bit undervalued as a result, but what’s here isn’t too bad. 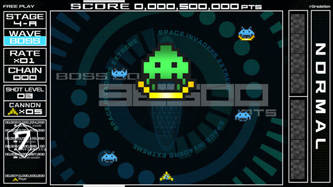 The big one of the package is a little something called Space Invaders Extreme. Initially released for Xbox 360, this remixed title has since appeared on PlayStation Vita, Steam and other platforms. Now, on PS4 and Switch, it gets to live on in all its glory, with remixed stages, cool power-ups, bonus rounds and more. It can be a bit hodgepodge when it comes to its presentation, but it’s certainly a lot of fun.
The next game is Space Invaders Gigamax 4 SE. This is a special version of a limited arcade game that came out in Japan, focusing on four players working together to take down waves of invaders. On the co-op front, it’s not too shabby. However, it’s lacking in overall variety. Still, for collectors, this game might just be worth the purchase by itself. You won’t really find Gigamax anywhere else.
Finally, there’s Arkanoid vs. Space Invaders, which “blends” the two franchises together into one neat little game. It plays fine and everything, but there’s a big problem with its formatting, as it doesn’t quite fit comfortably on the main screen as it should. You can get through it with a little formatting, but ININ Games should have made accessing it way easier. Most people might be turned off by this one before they even give it a chance.

Missed Opportunities
Where Space Invaders Forever really fails is when it comes to offering anything else – because it doesn’t. The three games that are included here are okay, but that’s it. There’s no behind-the-scenes extras celebrating the legacy or talking about its creation, nor any sort of unlockable goodies to dig into. That’s a huge disappointment, since the name of the game is literally Forever, after all. 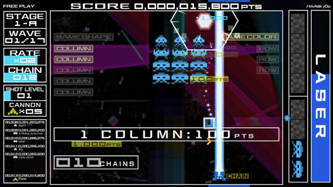 For that matter, more unique titles could’ve been thrown in to keep fans busy. Where’s Majestic? Where’s Space Invaders ’95? What about Space Invaders Extreme 2, which is still being criminally ignored? For $30, the publisher should’ve included more content, like with the deluxe Japanese release of the game.
As it stands, it’s a good curio title for those that grew up with the Invaders. But, clearly, more could’ve been done here.

Will The Invaders Win Your Heart?
The recommendation of Space Invaders Forever truly depends on just how much you love the franchise. Space Invaders Extreme is a blast; and the other two games aren’t bad either. But that’s really all there is, and Forever pales in comparison to way better collections out there. It’s a good retro title for those that don’t mind taking a gamble, but we can’t help but think those pesky little invaders deserved a bit more. This is an anniversary title, after all – and not just a quick one-shot.

Want to play Space Invaders Forever on a shiny new PS5? Here’s how you can win one of your own! 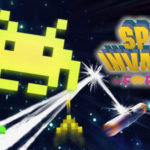