From all of us at The Game Butler, we’d like to wish you a Merry Christmas, Happy Holidays and
joyous New Year.
That said, Die Hard is totally a Christmas movie. Many have made arguments about how it came out over the summer and Bruce Willis doesn’t think it’s a Christmas movie and yadda yadda yadda. But it is, and there have been many arguments in favor of it not being Christmas until Hans Gruber’s falls off the Nakatomi skyscraper. Look, it just is.
So if you’re looking for something to do tonight aside from watching that wonderful piece of
moviemaking, we have a suggestion – Die Hard Arcade.

Originally released as Dynamite Deka in Japan, it’s a 3D beat-em-up that uses texture-mapped polygonal graphics to rather comical effect. And to give it more appeal in the US, Sega teamed up with Fox Interactive to license it as a Die Hard property upon its release in 1996, with the main character resembling (in a sense) lead character John McClane. Alongside him is a fellow female cop who’s also out to bust some terrorist heads. 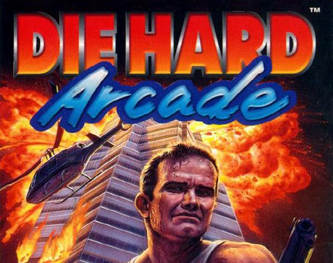 The game has the duo facing all sorts of terrorists as they attempt to rescue the president’s daughter from a madman. And, boy, does he have all sorts of thugs in his employ. Rogue firefighters, laser-shooting Spiderbots, wrestlers, and even a biker by the name of Hog.
But along the way, John and his female ally can use all sorts of weapons to take them down, including firearms, bats, other melee weapons and, at one point, even a Grandfather clock. Because why not. And, for good measure, there’s also quick-time events where you can knock down a foe on the fly, with a quick punch or kick.
Is the game goofy? Sure. Is it over in about half an hour of play? That’s the way brawlers usually go, so yeah. But is it a blast? Absolutely. And is it well timed enough to play through on Christmas? It sure is.

Get Yourself A Sega Saturn
If you don’t have the convenience of going to an arcade – and with COVID-19, we totally get
that – there’s another option. Die Hard Arcade was ported to the Sega Saturn a year after its arcade release, with a port that was pretty much spot-on with the original version. It doesn’t lose any of its luster when it comes to its ridiculous beat-em-up tactics and its over-the-top musical score.
And what’s more, the home release features a bonus game called Deep Scan, based on the 1973 arcade classic. In it, you drop charges on enemies that are lurking beneath the water. But the game also serves as a bonus advantage for Die Hard Arcade – by getting a high enough score, you can earn enough credits to keep your game going, compared to the default count you have to start with. We’ve included some footage of Deep Scan below, in case you need to see just how rad it is.

Yippie-Ki-Yay!
It may be too late to try and enjoy Die Hard Arcade for this holiday season, save for owning an emulator that already has the game set up. But we’re just here to provide a recommendation
for it, giving a little holiday cheer while you prepare yourself for the annual viewing of the film.
So track it down and have yourself a merry little holiday season.
Oh, and if you need a reminder of how awesome the movie is, relax – we included a trailer below, boobie.