Do it for Dirk.

As you can see from our arcade game holiday shoppers’ guide, there are several choices available when it comes to getting coin-op thrills from the convenience of home. But it’s going to take quite a bit to top the latest effort from New Wave Toys in its Replicade line-up – Dragon’s Lair.
The team has made great arcade replicas in the past, including Centipede, Tempest and the just- released Asteroids. But Dragon’s Lair is something else, a game that miraculously recreates the design of the classic 80’s Cinematronics machine, while also packing on modern-day extras that fans and collectors alike will truly love. It truly is the total package – and for $120, everyone could use this in their lives.

Dirk The Daring Is Never Done
The game is an interactive cartoon animated by Don Bluth and produced by Gary Goldman. If those names sound familiar, they worked on such feature-length movies as The Secret of NIMH, An American Tail and my personal favorite, Titan A.E. 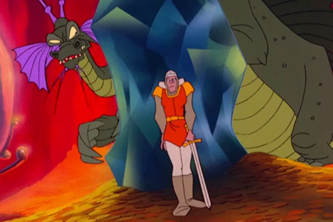 In this adventure, a brave knight named Dirk the Daring lays siege to a booby-trapped castle, in the hopes of rescuing Princess Daphne from the clutches of Singe the Dragon. But the journey is anything but easy, as you’ll need to memorize moves through each stage to win the day.
Practice makes perfect here, and one neat aspect about this Replicade is how perfectly New Wave synchs the gameplay. You have to time the moves just right, or Dirk is pretty much toast.
Fortunately, you can adjust settings to make the game easier, giving yourself more lives and leeway when it comes to certain moves. It’s a neat little menu that you can access simply by pressing in the right coin slot on the front of the machine.
Though you can eventually beat the game in about a 15 minute shot or so, Dragon’s Lair remains an immaculate piece of arcade history. And the fact you can always go for a higher score ties in with the retro gaming tutelage, even if you won’t necessarily connect online to challenge others. No matter – this is still a highly joyous game, 27 years after its initial release.

Unparalleled Design
As we mentioned above, New Wave has replicated the classic Cinematronics cabinet down to a tee. The scoreboard looks exactly like the original, and the controls are wonderfully recreated, right down to the start buttons. The game even has its classic “attract” screen, getting you geared up for the adventure that lies ahead. 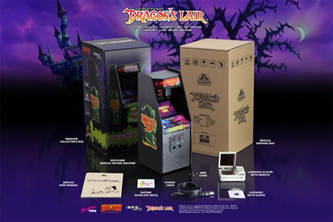 The visual appearance of the game, with a very small (but adequate) screen, is impressive, as it looks just like an arcade monitor, with no wear or tear to speak of. The cabinet design is cool as well, and it’s a treat being able to put a Princess Daphne sticker (included) on the front.
But it’s the extras that impress here. The game charges up easily with the included USB cable, for hours’ worth of play. There’s also the ability to connect the game to a TV via HDMI, just like the classic days of the original arcade game. You can adjust volume as well, if need be.
And, finally, take a second to open up the drawer in the back. There, you’ll find a facsimile classic laserdisc player, complete with a disc you can put inside the package. It’s cosmetic, and the game doesn’t require it to run, but it’s awesome nevertheless. Now we just need Leonard Nimoy to come out and advertise it, like he did in the 80’s.

A Must-Own
Even if you conquered Dragon’s Lair to death back in the days of old, this New Wave Toys Replicade is well worth owning. It’s an exact recreation of the arcade favorite, right down to the toned gameplay and the great cabinet design. The extras are neat as well, and the extras make the plunking down of cash even more worth it.
I certainly hope we’re not done seeing cabinets like this. What I wouldn’t give to complete the collection with Space Ace and Dragon’s Lair II: Timewarp machines. Given how this one sells, we’re likely to see that happen. Do it for Don Bluth! 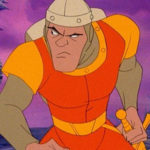