(Reviewed on PlayStation 5)
Ubisoft could’ve easily taken a breather on releasing anything new over the holidays. It already had Watch Dogs Legion and Assassin’s Creed Valhalla to lean on, not to mention a next-gen version of Tom Clancy’s Rainbow Six Siege, which drops this week with some notable improvements. 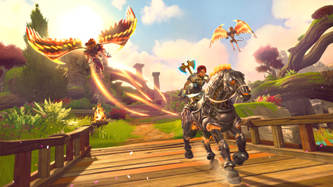 But, alas, the company felt like breathing some new life onto the game scene. Well, mostly new anyway. Immortals Fenyx Rising is a fresh adventure from the company, but one that clearly shows inspiration taken from the likes of its own Assassin’s Creed franchise, as well as The Legend of Zelda: Breath of the Wild.
But a rip-off it is not, as it mixes innovative combat, (mostly) fun puzzle solving and a world filled with godly possibilities. By doing so, it creates a wondrous new adventure that should keep thrill seekers busy for some time.

A Not So Typical Greek Story
The game features narration from godly characters Prometheus and Zeus. However, it does so with a very effective tongue-in-cheek. Sure, it follows mythos as the duo talk about the uprising of a mortal character named Fenyx, who ends up being an unlikely savior to the world. But it does so in an interesting manner, with jokes that never get too much over their head and a playful tone that, unlike some movies out there, won’t bore you to tears.
True, some of the dialogue can get a little weird, particularly with the modern references. (I assume the game producers thought it would make for good “wink of the eye” stuff.) But overall, it works in Fenyx’s favor, keeping things light and breezy as you venture out into the world, collecting new items to help you become a god-like hero.
But what’s great is how the game keeps pace with the narration, so you never feel left behind.
As you get started helping Fenyx, you’ll learn quickly from the game’s tutorials, including solving puzzles, whisking items towards you at will (good ol’ lightning powers) and taking out enemies both big and small. And that leads us to…

Sharp Gameplay, With Only Some Minor Rough Edges
There’s a lot that works in Immortals Fenyx Rising’s favor when it comes to gameplay. Almost all aspects of the game click instantly, compelling you to continue on as you solve quests throughout the open world. 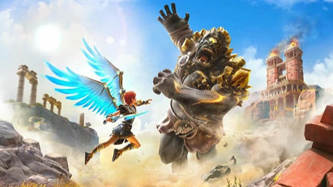 The combat is a tour-de-force, with a strong lock-on system, a variety of weapons (including a helpful bow and arrow for annoying flying creatures), and solid close-range combat, no matter what you choose to go with.
Puzzle solving is also mostly a plus, though there are times they can be a tad difficult. For instance, it took us a good hour to figure out an interesting ball maze, which we had to take control of from a distance, via switches. Since we couldn’t get a glimpse of the entire maze, it was hard to figure out just where it needed to go, until we had that “Aha!” moment. Still, it wouldn’t hurt to provide hints for those that are likely to get stuck on some of these.
As for travelling, it’s fun, as you can climb up objects, swim (to a certain degree, thanks to a stamina bar) and even ride around on a mighty steed. The only downside to this is that the world is too big. It can take a while getting where you need to go, so make sure you set some time aside to enjoy it. That’s not a huge complaint, since that adds hours to the game’s replay value between the main and secondary missions.

A Splendid Looking Adventure
Though we didn’t try it on other platforms just yet, Immortals Fenyx Rising feels right at home on the PlayStation 5. The game features a breezy sixty frames per second speed throughout, even during combat scenarios; and the transition from interior to exterior locales is smooth.
Not only that, but the animations look great, particularly the explosions and certain effects on larger creatures. There are notable similarities to Breath of the Wild, in a way, but nothing entirely copied. Just inspired. 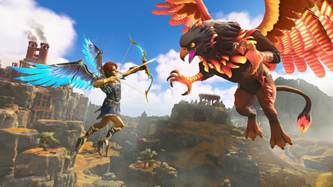 The audio is excellent too. The bits and pieces of music definitely fit the classic Greek themes, while at the same time setting the pace for the adventure ahead of you. And the voicework is mostly good, though some characters tend to sound a bit annoying, like the “boy” who’s anything but a common thief. Still, the humorous banter between Prometheus and Zeus more than make up for it.

Your Interest Should Be Rising In Fenyx
Though something could be said about its world size and some of the more annoying puzzles, Immortals Fenyx Rising is mostly a triumph from Ubisoft. It does wear its inspirations closely on its sleeve, but it makes the most from that with a wonderfully designed game, featuring a light- hearted approach and frivolous action. I’d love to see more of this in the years ahead, with additional venturers joining the fray alongside Fenyx. For now, though, this makes for a heck of a new entry for Ubisoft – and a fine holiday treat.
And someone give Prometheus and Zeus a podcast. They could call it “By the Gods” or something. 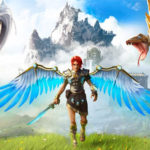