Last night, during The Game Awards presentation that saw the lion’s share of huge game announcements, Capcom snuck in some retro love for the Nintendo Switch with two key announcements. The first, Capcom Arcade Stadium, will bring 32 arcade favorites to the platform this February. But the second? The return of the Ghosts ‘n Goblins series, with a hint of Resurrection.
The trailer, below, gives you an idea of just what you’re in for. While the vibe is definitely there from the older games, some folks believe its look is a bit…odd, at least compared to older games in the series.

However, the appearance isn’t all that off if you consider the previous game in the series, which came out wayyyyy back in 2006. That game? Ultimate Ghosts ‘n Goblins.
Produced for the PlayStation Portable (and compatible with the PlayStation Vita years later), Ultimate offers a similar art style that you can see with Resurrection. It has an appearance similar to older games, but with strong new animations and background design, as presented by the development team at Tose. (No word yet if they’re working on the new game, but it wouldn’t be a surprise with how it comes across.) 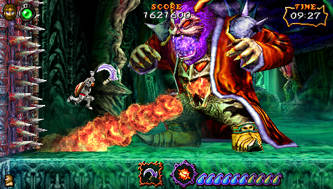 The PSP version definitely had its difficulty, especially if you went with the Ultimate Mode, which throws all kinds of challenges at you. However, there’s also a Standard Mode for those that want a more fairly balanced adventure, along with a neat Novice Mod for newcomers, providing better power-ups and more hits to take.
The game did fairly well for Capcom, but the franchise would be dormant for many years, despite fans still enjoying the older adventures on the NES and SNES Classic platforms, as well as in digital format. (Along with Demon’s Crest, of course.) But now it appears that the company wants to get that “old feeling” back with Resurrection, which is sure to be a hit once it drops this February.
Did you miss out on Ultimate Ghosts ‘n Goblins? You can still pick it up physically for the Sony PSP, and, surprisingly enough, you can still download it for PS Vita here. It’s a swell game, despite its different appearance, and it’s sure to get you warmed up for Resurrection. We know we can’t wait to jump back in.

Psssst! Want to win a PlayStation 5 for the holiday season? Find out how to win one here!