Power strips. We all need them, right? After all, you can’t hook up multiple game systems to your TV without one. And there are several out there that just don’t get the job done when it
comes to safety and, well, looking cool. Because they’re just a boring old power strip.Indiegogo campaign
This is where ESHLDTY T1 comes in. The company has introduced a stylish new mini-power strip called the IPX6 Splashproof Power Strip, which is currently in the midst of a successful.

Featured in the trailer below, the IPX6 enables you to put in up to nine different power outlets, three USB-powered cables and one USB-C fast charge device, all while flashing on with beautiful RGB lighting that you can change with the press of the top of the tower. And on top of that, you can also change its coloring with a press of the sensor on top, with some settings even interacting with your favorite music. Take that, boring ol’ power strip!
We had a chance to interact with one of these devices, as ESHLDTY T1 was kind enough to send us a sample. Needless to say, we were quite impressed.

Specs Galore
First off, the device is fairly easy to use. There’s an on/off switch located on the bottom that lights up when the unit is in use. Once it is, you can plug in your devices with the three plug holes lined up on each of its three sides. It can take this power pretty well, as we had a computer, a PS5 and an Xbox Series X connected to it at the same time, without losing any luster from its performance. 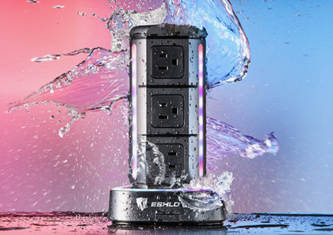 The outlets are fully protected; and they’re actually waterproof as well. While we weren’t crazy enough to give this a test with a pitcher of water or anything, the trailer does give you an idea of how this works. Granted, that doesn’t mean you should use it inside a pool, although it does look pretty stylish sitting on a patio deck, should you decide to use your laptop or some kind of projector out there. There’s also surge protection, so you can rest easy should the power go out suddenly, without your devices getting fried.

Now That’s A Light Show
What’s most impressive about the IPX6, again, is the way it lights up. With horizontal and vertical lighting that runs across the device (as well as in a circular pattern up top), it adds a flourish you normally wouldn’t see in a power strip. But it’s the way that it interacts that’s really cool.
By tapping on the top of the device, you can actually change its color scheme across a number of solid choices, as well as a continuously revolving rainbow array, should you be feeling stylish.
And there’s also a sound sensor built inside, so it actually shifts along to your music, depending how close the device is to your speaker. This mode is excellent and really adds to your entertainment center.

So What’s It Cost?
While this is certainly more expensive than a routine power strip, it’s something that fits right in with whatever Razer or glowing peripherals you have. 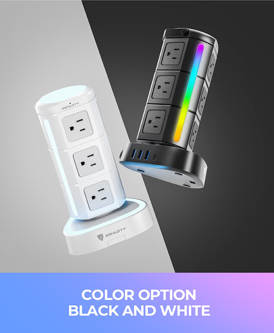 And right now, by taking part in the Indiegogo campaign, you can get yours for just $65 and up, depending how many you want. And you don’t have to wait long for it either, as it’s set to ship in December 2020. Just in time for Christmas.
While a power strip may be the last thing on gamer’s minds, remember that you need power to light up your games, genius. (Well, on consoles – but eventually you’ll need to recharge those handhelds.) The IPX6 from ESHLDTY T1 is a work of art, and technically proven to handle even your most demanding power needs. That, and it looks stylish and packs safety to boot.
Want to learn more about the device? Check out the Indiegogo campaign here!

And how about a nice PlayStation 5 system to plug into the power strip? Well, here’s your chance to win one!