It’s Cyber Monday, and you know what that means – hundreds of great game deals that you can get shipped right to your home! But for you Fortnite fans, there’s a little something special waiting for those of you that wanted a Nintendo Switch.

Nintendo, in conjunction with Epic Games, has just introduced a limited edition Fortnite bundle, featuring a specially designed Nintendo Switch dock with characters from the game, along with a matching controller featuring yellow and blue Joy-Con controllers. You can get a glimpse at the bundle below.

The bundle goes for $299.99, and comes with a number of goodies. Along with a full download of the free-to-play game, players will also receive 2,000 V-Bucks to spend on whatever they please, from skins to emotes. On top of that, an exclusive Wildcat Bundle is also available, featuring cosmetic items such as the Sleek Strike Back Bling and the Wildcat Outfit.
The bundle recently went live at GameStop, but has already sold out at what Spaceballs might deem “ludicrous speed,” though more units are expected to go in stock sometime today. If that link doesn’t work for you, Walmart should have it available as well. (It never hurts to set up an in-stock alert, just in case.) 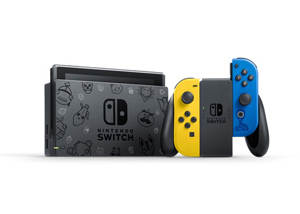 In addition, Nintendo has also slashed the prices of a number of digital games for Nintendo Switch, ranging in price from 20 to 50 percent. These includes the company’s various releases, like Xenoblade Chronicles 2, Marvel Ultimate Alliance 3: The Black Order, and The Legend of Zelda: Link’s Awakening. Hit the eShop page and shop around for any deals that might suit your needs. It’s going on through December 2, so you don’t have long!

That Fortnite bundle is likely to become a collector’s item in no time flat, so don’t miss out on your chance to get it! If that doesn’t work out, you can always try to win a PlayStation 5.