It’s hard to believe that Sackboy, the beloved star of the LittleBigPlanet series, has been waiting for his next game adventure over the past five years. It seemed like only yesterday that we were enjoying Sumo Digital’s LittleBigPlanet 3 on the PlayStation 4 front, with the team picking up right where the previous developers at Media Molecule left off.

But now Sackboy has returned, and this time in an adventure that backs away from the creative community side of things in favor of a 3D platforming adventure akin, in some ways, to Nintendo’s Super Mario 3D World. While that may bum out some of you that were looking to stretch those brainy muscles, don’t fret – Sackboy: A Big Adventure more than picks up the slack, thanks to charming gameplay, a wonderful presentation and a lot of content to root through. It’ll fit the bill if you’re looking for a fun romp on your PlayStation 4 – or, for that matter, PlayStation 5, since it’s forwards compatible and also includes a free digital copy.

Beware The Topsy Turver
In the game, Sackboy finds himself up against a dangerous adversary named Vex, who has enslaved a good portion of Craftworld’s inhabitants to work on a devastating device called the Topsy Turver. Fortunately, he’s on the job to save his land, alongside his allies, which players can join in and take control of. And don’t worry, Sackboy and his buddies are all equal gameplay-wise, so you’ll never have to fight over who has the better hero. 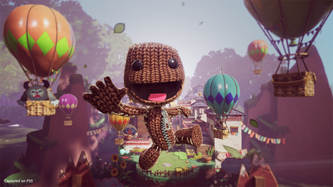 In fact, the game’s local co-op is a real charmer, with up to four players being able to take part in the fun. What’s more, the game’s wondrously wide-open design makes it easy to keep track of players as they bop enemies and collect all the items they can within the world.
The only downside to this interaction is that there’s no online co-op. At least, not yet. Sumo Digital promised it will launch later this year with a free update across both PlayStation 4 and PlayStation 5, so you’ll be able to have fun with your quarantined allies just in time for the holidays.

Gameplay That Goes The Extra Mile
One genuine surprise with Sumo’s take on Sackboy is just how entertaining the platforming action can be. Sackboy and the other characters have concise actions that come off beautifully, from a spin punch to some great jumping techniques. 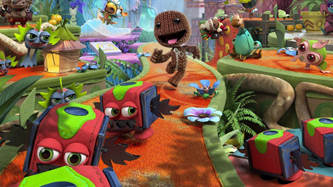 But what’s really cool are the power-ups that you score along the way, which can help you access even more of the land. For instance, a Ratchet and Clank-style hookshot lets you grapple across wider areas; and a pair of rocket roots can come in handy for getting to hard-to-reach areas to find all the collectibles. It’s a great deal of fun, and the boss fights are worth a mention as well.
What’s more, the game has the right level of challenge to it. It can be tough for those that want to find everything within it, making the overall length cap out at around 15 hours. But it’s also a blast for younger gamers that want to have fun with their parents after breaking open the PS5, or enjoying the antics on PlayStation 4. Overall, it’s good fun. And with all the bonus items you can unlock (including, yes, a ton of costumes), you’ll be busy for a while.

A Sharp Presentation For A PS4 Title
Obviously, Sackboy: A Big Adventure is meant to shine best on the PlayStation 5, as that’s the platform Sumo Digital had in mind for it. But it doesn’t look too shabby at all on the PS4. 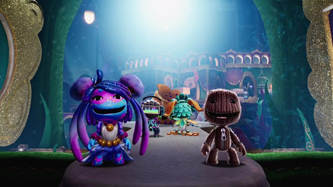 The visuals represent LittleBigPlanet at its finest, with a lot of creative level designs, fun creatures to interact with (good and bad) and lots of hidden surprises. And the camera perspective is just about perfect, keeping everything just about right when it comes to focus. Even in the co-op based levels, it’s a cinch to keep it all in perspective.
Also charming is the audio portion of the game. Winifred Phillips’ soundtrack is lively and bouncy, akin to the previous LittleBigPlanet titles. And the voicework is top notch, particularly Richard E. Grant, who voices Vex with the right level of malice. But considering he played the even Allegiant General in Star Wars: The Rise of Skywalker, villainy seems to be up his alley anyway. (But it’s never too much for the kids to bear, we assure you.) The other sound effects and actors are spot-on, too.

Don’t Let This Sackboy Pass You By
In the face of superior PS5 firepower like Spider-Man: Miles Morales and Demon’s Souls, it may be easy to brush off Sackboy: A Big Adventure as “forgettable” fare. But that would be a crucial mistake. What lies here is a wonderful platformer that makes up for its lack of a creative community with robust, enjoyable level design and lots of fun for you and your local friends.
Online play would’ve been great at launch, but we’re getting it sooner rather than later, so don’t fret too much. Sackboy’s come back in a big way, and you’d be crazy to pass up on his antics, either on PS4 or PS5. Remember, you get both versions for one price, so dig in to Craftworld!

Don’t forget, we’re giving away 2 PlayStation 5 consoles! Follow this link to get details on how to win! 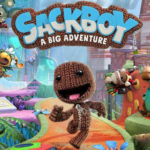