Gran Turismo 7 Series Roaring Back In 2021

The launch line-up for the PlayStation 5 next week looks pretty impressive, thanks to top-tier games like Spider-Man: Miles Morales, Demon’s Souls and Sackboy. But the question is what comes after.
Well, we obviously know a new Ratchet and Clank is coming. But the racing community is frothing at the mouth over the previous reveal of a new Gran Turismo game, an official chapter instead of an off-shoot like the PS4 got with Gran Turismo Sport.
Based on what we’ve seen thus far, Gran Turismo 7 looks incredibly promising – and now we have a pretty good idea of when it’ll be pulling into the garage. The question is if it’ll have the speed needed to put the series back on track, after Sport managed to turn a few folks off.

Boosted features
According to Gran Turismo 7’s official product page, the developers at Polyphony Digital are packing the game with some spectacular visuals. It will support ray tracing and have support for HDR and 4K alike (provided your TV supports it), all at a blistering 60 frame per second speed. 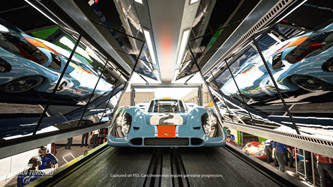 Not only that, but the game will load quickly. How quickly, you ask? Well, according to the details you’ll be able to select from a variety of cars with zero load times. No word yet if that’ll be the same with the actual races, but the wait shouldn’t be too long.
The game will also utilize Tempest 3D AudioTech, so it’ll sound just as good as it looks with its roaring engines and atmospheric effects. We obviously know that Polyphony Digital is all about getting the authenticity of racing down with their games. And this should be a game that marks a new high point in the series.

But how will it feel and perform?
There’s some question as to how Gran Turismo 7 will handle once it comes out. Well, judging by what we’ve seen in previous entries, Polyphony Digital should load it up with all sorts of excellent technical gameplay. Not only that, but it will have a Driving School feature that’ll teach you all the ins and outs of simulated racing. That’ll come in handy before you hop online through PlayStation Network and take on the world. 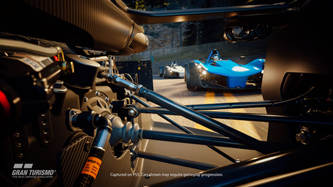 Let’s not forget what the game can do via the PlaySense controller as well. With Haptic sensors built in and features to take advantage of, players should have no trouble feeling the thrill of the race, right down to the acceleration vibrating into their hands. And the various weight of the cars will also play a factor as well, really giving you an idea of Polyphony’s technical sense with this game.
But there is one question – just how much the game will rely on online features. As you may recall, Gran Turismo Sport was a little too reliant with these, even requiring you to be logged in to do something as simple as saving your game. It got too excessive; we think. Hopefully, even with the next-gen muscle Polyphony is pouring into the game, it’ll remember to include some
stuff for offline players to enjoy as well.

Ready for a 2021 race?
A new ad suggests that Gran Turismo 7 will drop sometime in the first half of 2021 for PlayStation 5. Of course, that’s not final, as there could possibly be a delay with development.
You know how Polyphony Digital gets when it comes to finer detail within its games. However, once it does arrive, it should push players into the next level of simulated racing. Here’s hoping it has what it takes to put it back on track.
You can see the game in action in the trailer below.