Last month, we previewed Destruction AllStars, an upcoming multiplayer vehicular action game coming to PlayStation 5 from the developers at Lucid Games (Blur, Geometry Wars). However, interesting change has suddenly knocked it from the launch line-up for Sony’s next console. 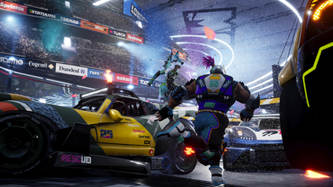 Don’t worry too much, though – when it arrives, it’ll be wayyyyy more affordable.
In a new PlayStation Blog post today, product development director Pete Smith confirmed that the game is now delayed to February 2021. But with that, it’ll make the move to Sony’s PlayStation Plus service, making it a free download for a limited time.
“This may be disappointing news for some of you who were looking to play the game at launch, but we hope you understand the decision,” Smith explained. He also confirmed that anyone who pre-ordered the game for launch will be promptly refunded for their purchase.

Check out the trailer below to see the game in action, and prepare yourself for vehicular goodness early next year!