by Tyler
in Cheats

One thing we know about Alexander Ovechkin is that he loves to score his share of goals. In order to harness our inner Ovechkin (who’s about ready to score his 10th Richard trophy, by the way), we will have to examine the 4 key ingredients that lead him to providing for his team on such a consistent basis without being much of a liability.

Keep Your Head Up
Once diving into a game mode like EASHL 3’s, you will be quick to realize how a scoring chance can come out of nowhere. Defensive awareness is everything in this game considering how frequently cross creases and short side snipes go in, there is never a good time to be in position. 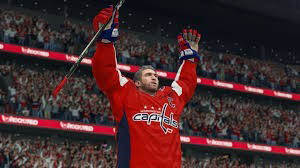 If you find yourself getting blown by often while you are on defense, try being less aggressive on the puck and focus more on cutting off a passing lane or keeping yourself between them and the net to further hinder their shot.

Accuracy
There is no better feeling than lighting the lamp with a howitzer bar down in overtime to lead your team to victory – but to achieve this comes much discipline. Efficiency is everything in this year’s NHL 21 with the game being as fast paced as ever missing the net and ringing it around the boards always has the chance of resulting in a breakaway towards your end.
Make sure to get yourself in the slot which is around or in between the hash marks as this will give you your best odds of scoring off a wrist shot. Attempt to get into the habit of picking a corner before each shot and this will enable you to better see the opening the goalie leaves you in the future.

Steady Teammates
Although Alexander Ovechkin is quite effective on his own much credit for Ovi’s success is his teammates putting him in the position to put up these rock star stats.

For example, Ovechkin has gained much respect when it comes to his one-time shot so he frequently plays left defense in powerplay situations to allow him one timer chances, finding yourself teammates to play with on a regular basis will cause you to gain chemistry with these players inspiring a high level of teamplay will not only bring the best out of you but also your line mates.

Little Is More
Alex has gone viral over some of his dirty “dangles” in the past but you may be surprised to know that he is very patient and not going for a spin-o-rama every possession.
To be slithery and hard to catch on the ice often more than not you do not need to attempt a deke to even get around your defender, rather passing to a teammate to create a tic tac toe opportunity will often be of much more benefit.

Master With Overchkin
To conclude there is no need to be the hero every game. Ovechkin is greatly admired for his consistency year in and year out more so than for his goal sliding on his back with one hand, honestly I need to watch that again.