Set to debut in just a matter of days, Ghostrunner appears to be a thrilling throwback to the first-person action days of old, when all you needed to keep alive is a steady sword and a good set of wits. It’s the sort of game where survival’s the name of the game, but being fast and eloquent with your kills is just as vital.

Set to debut later this month, this adventure looks to shake things up across the landscape on consoles and PC alike – yes, Nintendo Switch included. And what’s more, it’s been confirmed to also bring its antics to the next-generation, with a PS5 upgrade offered for 2021. What’s in store at that point hasn’t been revealed just yet.
But, based on what we’ve seen thus far, Ghostrunner should be an interesting trial for those seeking a new challenge. That’s because this is a one-hit sort of game. Your enemies will fall at your feet with the right slice. However, if you’re not careful, they can cut you down pretty quickly, too.

A Ghostrunner For All Seasons
In the game, you portray a defender of sorts, called upon to keep the cyberpunk-ish city of Dharma Tower from going to crap. Alas, it’s not that easy, as a dangerous foe named the Keymaster has scattered enemies throughout the city, trying to maintain control. 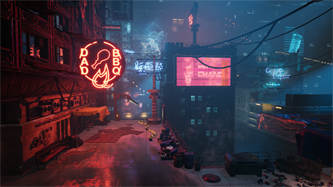 Ah, but there’s a twist. You’re not in this for nothing, as you’re out to recover your lost memory. The only guide that you have serving you in an AI system, guiding you through your move set and bringing you that much closer to the Keymaster – and what’s more, your lost memories.
You’ve got some awesome abilities at your arsenal, including some parkour style moves that would make most first-person shooters blush.
And then there’s your blade, ideal for cutting down foes quickly and conveniently.
But, as we mentioned above, one hit and you’ll have to start back at the checkpoint. That ratchets the difficulty up quite a bit, but the game doesn’t limit your resources. While starting you back at your point, you can really see how each level opens up. There are various routes that can get you where you need to go, though you’ll still need to create enough of an effective run to get you through it. Experimentation goes a long way here, as you can see from hotfooting it across rooftops and landing your blade squarely in the chest of your foes.
It’s a tough game, yes. But also one that shows you how to adapt creatively, and in a sharp kind of way. You’ll soon get a hang of the game’s controls and become a bad-ass in no time – and learn how to show off just the right way. It’s just the thing for speedrunners looking for their next demo game – this might just do the trick.

A Swell Looking Future
While the futuristic setting of the Ghostrunner might be a bit dingy for some (in a Blade Runner sort of setting), it actually sets the stage for the game’s wide open level design. Its atmospheric approach looks to be rather novel at this point; and the lighting is just about right for a game of this sort. Not to mention that the animations on the enemy characters is sharp, with their body language telling you when you’ll need to strike – and when to dodge effectively. 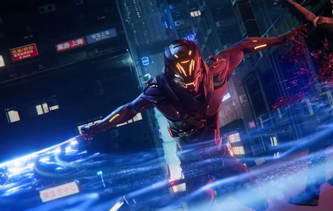 The frame rate is pretty solid, but we have a feeling that when it arrives, the PS5 version will have the smoothest of them all. That said, you should have no trouble getting the most out of this game’s performance on current machines.
Not only that, but the audio is sharp, as you can hear a good deal of what’s happening around you, along with guidance tips from that helpful AI. It might help to invest in a good headset, as you just might need it.

Carving Up Next Week
Ghostrunner looks to be an ideal underground hit for the gaming community when 505 Games starts serving up carnage next week.
Again, that’s for all consoles (except PS5) and PC, so no matter what your preference, you’ve got a lot of room for damage. Save that sweet blade for the strikes that count, because they’ll pay off beautifully.