Rocket League and Fortnite have already proven to be massive multiplayer hits for this generation. But what would happen if a developer mixed elements of these games into a new title for the next one? Well, we’re about to find out. 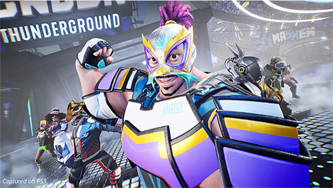 Lucid, a developer known for previous efforts like the Geometry Wars series, Blur and Project Gotham Racing, are stepping back behind the wheel for Destruction AllStars, which is set to rev up on the PlayStation 5 in time for its launch on November 12. It features a mixture of vehicular and on-foot mayhem, but takes a stride away from either of Epic’s free-to-play hits. Instead, it’s more concentrated on sporting destruction. After all, it’s right there in the title.

Chaos Is the Name of the Game
In Destruction AllStars, you’re out to destroy your vehicular competition. Think Twisted Metal, but with different, vibrant personalities and encased in an arena setting. Each of the drivers entering the competition have different abilities that they can use with their vehicles, with 16 available in all. The goal of the game is to wipe out the opposition and become the king (or queen) of the Destruction AllStars competition – though that’s easier said than done. 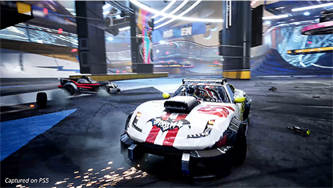 Along with speed, you’ll also use ramming and slamming to your ability, until it gets to the point that your opponent is left without a vehicle. But even then, they aren’t completely defenseless, as they can run around on foot and try to even the odds. Again, though, you’ll want to avoid getting that run down feeling.
As you gain progress during a match, you’ll be able to power up your hero vehicle with special abilities. Activate these and you can send opponents flying. Just make sure you save the attacks for when you need them the most – you don’t want to leave yourself too vulnerable.
Timing and tactics are everything in a game like Destruction AllStars, and not just speed. Sure, that helps as well, but you’ll also want to time your techniques so that they’re completely unleashed at the right time. It may take a little bit of practice, but soon you’ll be the master of your domain, saving those crunches for when they’re needed the most.

Bring Your Buddies
Along with single player competition, Destruction AllStars leans heavily on the multiplayer component. Although it’s unknown just how many players will be supported over the course of a match, Lucid is packing all sorts of options, making it a thrill to blast your buddies out of the arena. Or vice versa, if you’re not careful. 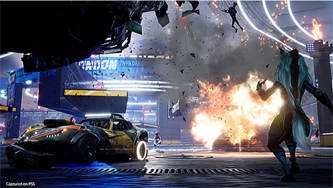 And considering the PS5 doesn’t have too many multiplayer efforts to lean on at the moment (aside from a port of Fortnite, natch), AllStars has the ability to swipe the title from its opposition and really shine with players that are into this sort of thing. Plus, it’ll give the PlayStation Network a boost in time for the console’s launch, which is pretty nice to have.

A Good Looking Game
We’ve only seen bits and pieces of Destruction AllStars in action thus far. However, from what we’ve seen, the developers at Lucid have added a great deal of polish to bring out the most of the PS5’s processing power. The arenas look flashy and outstanding; the cars themselves are radiant and look beautiful running at high speeds; and the drivers bring a sense of flair to the proceedings, right down to their wrestler masks and flashy outfits.
Not to mention that the game will take advantage of the console’s 3D sound, so that you can hear opponents coming from a mile away, even with the announcer going off on how you’re doing out there. That, combined with some fun music, should make this game worth a listen.

Hey Now, You’re AllStars!
We’ll still have to give Destruction AllStars a road test when it drops in just a few weeks’ time.
But considering Lucid’s track record (literally, they build tracks), we should be in for quite the AllStar treat when it arrives. Now crank that music and go destroy something.