When Sony hosted its PlayStation 5 virtual event earlier this summer, it featured a number of games that will no doubt be huge hit for the console. Among them is Ratchet & Clank: Rift Apart, the latest chapter in Insomniac Games’ ongoing space adventure series. Like clockwork, the devs are releasing a new Ratchet and Clank game to showcase the hardware power of the PS5. And it looks to be the biggest and best game yet, which is really saying something considering the legacy the series has built since its inception back in 2002. We’re talking nearly 20 years of great games. 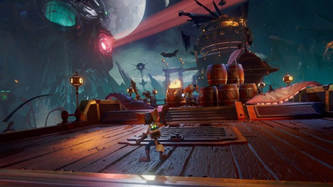 So what will make Rift Apart stand, er, apart? A number of things, actually.

It Looks Better Than Ever Before
If Insomniac Games understands anything, it’s how to get the most out of gaming hardware. When Ratchet & Clank Future: Tools of Destruction came out alongside the PlayStation 3, many considered it to be on the level of a Pixar cartoon brought to life. Years later, the company upped the ante with a spirited remake of Ratchet & Clank for the PlayStation 4, once again wowing its fans.
And now… welcome to the next level. Last week, Insomniac debuted a seven-minute long game clip of Rift Apart, showcasing its visuals and gameplay. And if you thought the previous games were lookers, you haven’t seen anything yet.

As you can see from the gameplay footage, it blends seamlessly with the in-game cinematics, creating an immersive experience in the process. What’s more, everything looks outstanding. From the weapon effects to the crazy design of the enemies to the small particle effects that come from the explosions, it’s a fantastic looking effort. And its battles look to draw in players closer than ever before. And keep in mind – we’ve only seen what appears to be the first few minutes of the game. 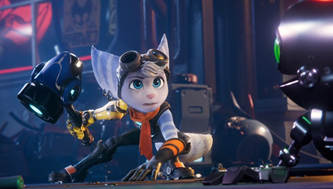 Rifting Will Really Open Up Gameplay
With the gameplay footage above, we get an idea of how “rifting” will work in the new Ratchet & Clank game. Using a device on his glove, Ratchet is able to open up little things within the level to his advantage. This allows him to defeat enemies, as well as getting around a level with the help of the tether. In the demo, Ratchet pulls a platform closer to him that would’ve otherwise been out of his reach.
This, combined with the many weapons that Ratchet will have on hand (including some truly mad ones that can level up and become more powerful), should make this an exciting title to play.
Not to mention that the experience is pretty seamless with very little loading time, if any at all. The levels, while immense, seem to load up without any problem. And the rifts appear to introduce new worlds for Ratchet and Clank to explore, meeting new characters and obliterating any enemies they come across. 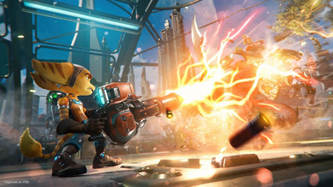 Plus, the rift effects can lead to unpredictable results. As you can see in the demo, they create all sorts of opportunities for travel, as well as foes popping into the scene. It sure beats waiting a few seconds getting around a large space void.

A Must Have PS5 Game? Looking That Way
We still need to give Ratchet & Clank: Rift Apart a go when it eventually arrives this holiday season. We don’t even know a release date yet. However, it looks like Insomniac has poured all kinds of effort into it, making it the most elaborate game in the series to date. That’s a far cry from the simple adventure we first experienced back in 2002. These two have definitely grown up.
Be sure to check back for more coverage on Rift Apart shortly following its release this holiday on PlayStation 5.
Update! Release date June 11, 2021 for PlayStation 5.