Ghost of Tsushima Tips and Tricks To Help!

In case you missed it, we published our review of Ghost of Tsushima earlier this week. It’s a masterstroke of an action game, perhaps one of Sucker Punch’s greatest accomplishments. And hell yeah, it makes you feel like you’re an all-out samurai as you carve up fools with your weapons. However, this trek isn’t easy, nor should it be. And with that, there are a few tips that will help you further along on your adventure. We suggest taking them under advisement, because they’re going to help you as to try to settle the score with Khotun Khan while eventually becoming the legendary Ghost.

Two Tips To Being A Better Archer
While being able to take down opponents with a samurai sword is satisfying, you shouldn’t forget that you also have a bow and arrows. This will help you in taking down opponents from afar, in case you want to avoid being overloaded in an ambush. We’ve got two general tips that will help you gain the advantage in battle. If you see a group of enemies coming, try to take out the archers first. This is important because they can hit you from afar, even though they provide a signal of when they’re about to shoot. Pulling out your bow and arrow and pelting them with a couple of shots is useful before you take on the rest of the enemies with your blade.

Watch out for opportunities to set off traps. As you can see in the video below, there are many things you can use within the environment to take out foes. This includes a hornet’s nest, which will get them stung like crazy; as well as explosive barrels, which, surprise, take out anyone within their range. Take a good look at what items are surrounding these foes, and save yourself some arrows if you can. Oh, and don’t forget to check dead bodies for supplies. You’ll find some extra arrows this way.

Combat Techniques, And How A Quick Dodge Is Better Than A Roll 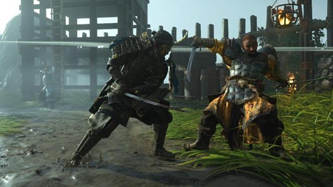 When it comes to taking on foes, there are a couple of things you’ll want to keep in mind. First, you’ll be able to either block or parry incoming strikes. This is important, as you’ll be able to keep your life bar from dwindling. Blocking is good, but parrying is even better, as you can throw off an opponent and leave them open for a stun or kill attack, depending on their strength. It’s a matter of getting down the timing, which you’ll be able to do with the training when it comes to that point within the game. Try it out, and use the system to your advantage.

Second, make sure to use stances however you can. There are different ones available over the course of the game, and you’ll want to change them up depending on who you’re going against. When it comes to a basic swordsmen, the default one you have should do the trick. But as the game progresses, you’ll come across new ones to use for stronger enemies, or even archers. Take the time to learn which one is best, and switch up when you feel the need.
Finally, the ability to dodge is neat. The first one you’ll learn is a quick sidestep, which you can use at any time. Simply hit the button when an incoming attack comes and it’ll go right past you, possibly setting up for a counterattack. Soon enough, you’ll be able to learn how to roll. This is useful should you become surrounded and unable to use your sword or Kunai knives. But there’s a catch with the roll – it can leave you too far out of the way. Save it as a desperation move and don’t use it too much during general combat. Instead, stick with the dodge techniques, and that way you can move in and strike and clear out the groups coming at you.

Don’t Forget To Upgrade Your Armor And Supplies 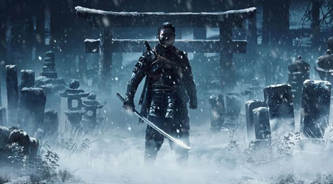 Over the course of Ghost of Tsushima, you’ll be able to pick up goods throughout the environment. These are actually rather helpful when it comes to selling at local shops, as you’ll be able to acquire supplies that will come in handy. These include things to help your health, as well as defense and more. So if you see something in a field, go ahead and pick it up. You’ll never know when it comes in handy.

Also, keep an eye on the new armor you pick up over the course of the game. Yes, you can change up your armor to something better, and even deck out Jin to look more like a bad-ass.
Plus, they provide a number of boosts, such as improvements to damage, health and even stealth techniques. They’ll assist you in becoming even stronger in the face of enemies, which is what being a Ghost is all about.
Enjoy Ghost of Tsushima, which is available now on PlayStation 4!