We reviewed SpongeBob Squarepants: Battle For Bikini Bottom Rehydrated over the weekend. And although it’s not as polished as remakes of Crash Bandicoot and Spyro the Dragon, it’s still a lovable platformer with more than enough going for it.
With that, there are some tips that you can follow in regards to finding some of the collectibles within the game, as well as general techniques that will assist you in conquering Bikini Bottom like a champion. So… are you ready, kids?!

The Collectibles Within the Game
WWhen it comes to collectibles, most of the time you’ll be picking up orbs throughout each stage, as well as occasional health refills for when your character is running a little low. Otherwise, you’ll want to keep an eye out for three general things. 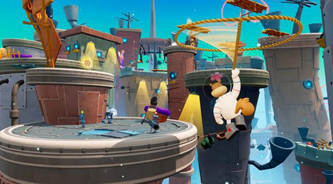 The first is Golden Underwear. That’s right, golden underwear. These are the highest level collectibles within the game, with three overall. As you find them, you’ll see a significant boost to your health – so they’re worth hunting down.
The next is Patrick’s Socks. Yep, socks are vital here. You’ll find 80 of these over the course of the game. Doing so will get you that much closer to completing it 100 percent – not to mention that Patrick will be as happy as a clam. (Even though he’s a starfish.)
Finally, there’s the Golden Spatulas. There are 100 of these, and as you collect them, you’ll open up new areas within the game. You’ll come across your first ones as SpongeBob explores his home area. Then, as new levels open up, you’ll be able to pick up more. Be on the lookout for some left behind by defeated bosses as well.
It’ll take a bit to find all the collectibles, as some tie in with others. However, it’s always a pleasure finding little secrets within the game, so be on the lookout! And if you need to keep track of how you’re doing within the game, just pause it. You’ll see just how many items you’ve collected! 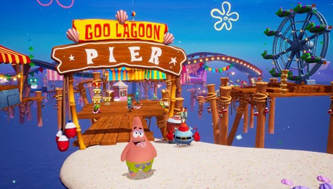 A Good Character For Each Job
There are three playable characters in Battle For Bikini Bottom Rehydrated – SpongeBob, Patrick and Sandy. They each offer something useful, so let’s break down each one. First, with SpongeBob, you can use bubble abilities. The Bubble Bash lets him swing around a wand that hits enemies; and he can also Bubble Bounce to smash them from up high. There is also Bubble Bowling, where he throws bowling balls; and a Cruise Bubble, which works along the lines of a guided missile. Next, there’s Patrick. He’s a good character when it comes to throwing stuff, from downed robots to fruit. Some fruit freezes all items in an area, while others simply hit switches. He’s ideal for accessing new areas that the others just can’t reach.
Finally, Sandy utilizes a lasso, which she can use to take down enemies. She can also perform a double jump, giving her access to areas others can’t reach; and can whip around her lasso to create a glide. Finally, she’s able to grapple onto points and use the rope to go across. You can change characters at certain checkpoints in Battle For Bikini Bottom. So, if you get stuck, don’t be afraid to change out. Also, you can revisit some areas once you have new abilities, opening up opportunities to attain Golden Spatulas and other collectibles you couldn’t before. 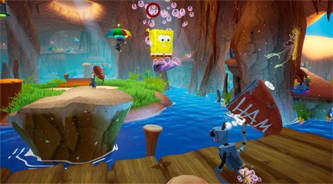 Hit that particular button (you’ll see the targeting reticule above it), and then go three in the same direction you were going before. Hit that button, and continue on this process until you go in a full circle at least a couple of times. By doing this, you’ll be able to activate all the towers the proper way without needing to backtrack – and a Golden Spatula will be awaiting for your trouble.
These should help get you started within the game. Good luck, and go get ‘em seafarers!
SpongeBob Squarepants: Battle For Bikini Bottom Rehydrated is available now.