Ever since it started releasing arcade-to-home machines last year, Tastemakers’ line-up of Arcade1up games have proven to be quite the collectibles. In the past, we’ve seen machines dedicated to Atari’s Star Wars trilogy, as well as the Teenage Mutant Ninja Turtles beat-em-ups and a few Marvel games, with more on the way later this year. But now, it’s released one of its biggest games to date – NBA Jam! 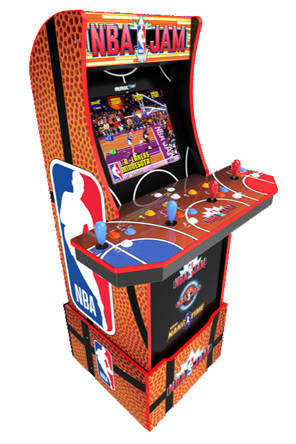 Originally a popular arcade favorite in the 90’s, we haven’t seen much of NBA Jam over the years, outside of EA Sports’ attempt at a revival a few years ago. Still, with every release, fans gather around and try to go for their 30-foot dunks like a champ. Now, with the Arcade1up NBA Jam cabinet, they can do so again. But the real question is if it’s worth the investment. As Tim Kitzrow, announcer in the original game, puts it, “YES!”

Yes, We Can Buy a Bucket
The first thing you’ll notice are the variety of games in the cabinet. Along with the original NBA Jam, there’s also NBA Jam: Tournament Edition and NBA Hangtime. They all play the same for the most part, but each one has special options, features and cheats that make them worth trying. Plus, they’re perfectly emulated from the original arcade code, right down to the original game’s scanlines, if you want to go that route. Each game offers exquisite gameplay, just like the arcades of old. You can either go for a good air shot on the corner or take it in for the slam dunk; or you can play defense and guard the basket like it’s your life on the line. What’s more, each game has options, so you can adjust difficulty however you see fit. Put it on hard, you scaredy cat! 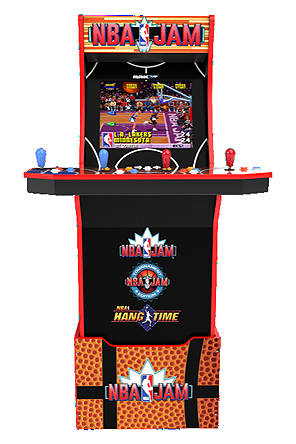 The game feels just fine with the arcade controls built into the cabinet, and the buttons and joysticks feel like the real deal. There’s also a four player set-up, so you can invite your friends to jump in and jam with you. That’s the best way to play, with some friends (or enemies) going at it with you. But there’s a neat little option if that’s not happening with COVID-19 and all.

Get Online and Face the Competition
For the first time ever, Arcade1up has incorporated online play into its game with NBA Jam. All you have to do is set up the wireless network (with the router included in the cabinet) and then set up the update. Once that’s done, you can hit the “LIVE” button on the cabinet and you’ll connect with other players.
Wi-Fi play works rather breezily here, with no worries when it comes to disconnection. Sure, you may have your sore losers here and there; but overall, it works beautifully. Not to mention that there are leaderboards as well, in case you don’t feel like going at it directly with someone. To boot, the game also features various options, like the ability to turn on and off Big Head Mode at will; as well as a light-up marquee like the original arcade game. It all comes together pretty nicely, and for a decent price of $399 plus tax. (Well, $499 if you want to go for the deluxe model with a lightbar on the playfield and a sit-down stool.) 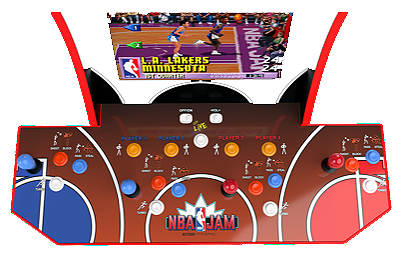 Just Like the Jam You Used To Enjoy
The impressive thing with NBA Jam is its emulation. As we mentioned above, the arcade coding is just about perfect, right down to Kitzrow’s announcements and the scaling of the players up and down the court. It’s also cool to turn on and off scanlines as well, though some people may prefer the general smoothness of the game. Whatever you prefer, this game is loaded with features.

My only complaint is that there’s no sign of NBA Showtime: NBA On NBC, a game that many players believe is the true evolution of Jam. On the flipside, however, there’s also no sign of the somewhat lukewarm NBA Jam Extreme; so maybe we’re getting off light with the trilogy at hand here. There’s value galore. 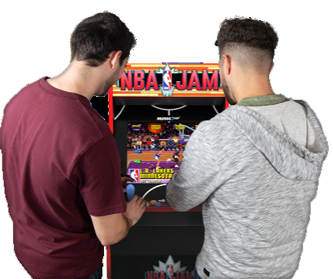 Get Your Boomshakalaka On

Its assembly may take a little bit of time (particularly with those dang smaller screws); and the online set-up could also consume about a half hour or so. But once you’re set, NBA Jam delivers with the best arcade-to-home experience from Arcade1up yet – and that’s including its incredible Star Wars line-up of games. The three titles here are a blast to play, either on your own or with others locally; and the online play offers some great mileage. Not only that, but it could be a great feature in future titles, like the forthcoming Marvel vs. Capcom cabinets. Arcade1up definitely comes a long way here, and you’d be a fool to pass up the glory of NBA Jam.
Now get to the rim and send the ball home already! 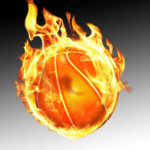