by Todd Mowatt The Gamebutler
in News

Tokyo Japan — Universal Studios Japan reopened earlier this month but plans for the opening of the very first Super Nintendo World have been delayed indefinitely. According to Japanese news organization NHK the Osaka amusement park, based on Nintendo’s Mario and other properties, was set to open in early July ahead of the 2020 Summer Olympics. But the Olympics were delayed due to the Pandemic. Universal is fearful that the new park will be so popular that it will be a danger to attendees and employees, so it has decided to delay the opening. 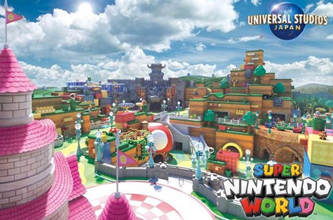 The area is based on Nintendo’s Mario games including Mario Kart. So far three other locations have been identified including one in the United States and another one possibly in Montreal Canada. But that has yet to be confirmed. Nintendo has a long-standing relationship with the Amusement Park LaRonde and that could be a partnership worth keeping an eye on!

Not much is known about which rides will be in the park, but a incredible Mario Kart go kart track is rumored to be one of the main attractions as well as a Mario themed arcade. The park will also feature “Power Up Bands,” which are bracelets that pair with a smartphone app to track digital activities that you take part in as you walk around the park.